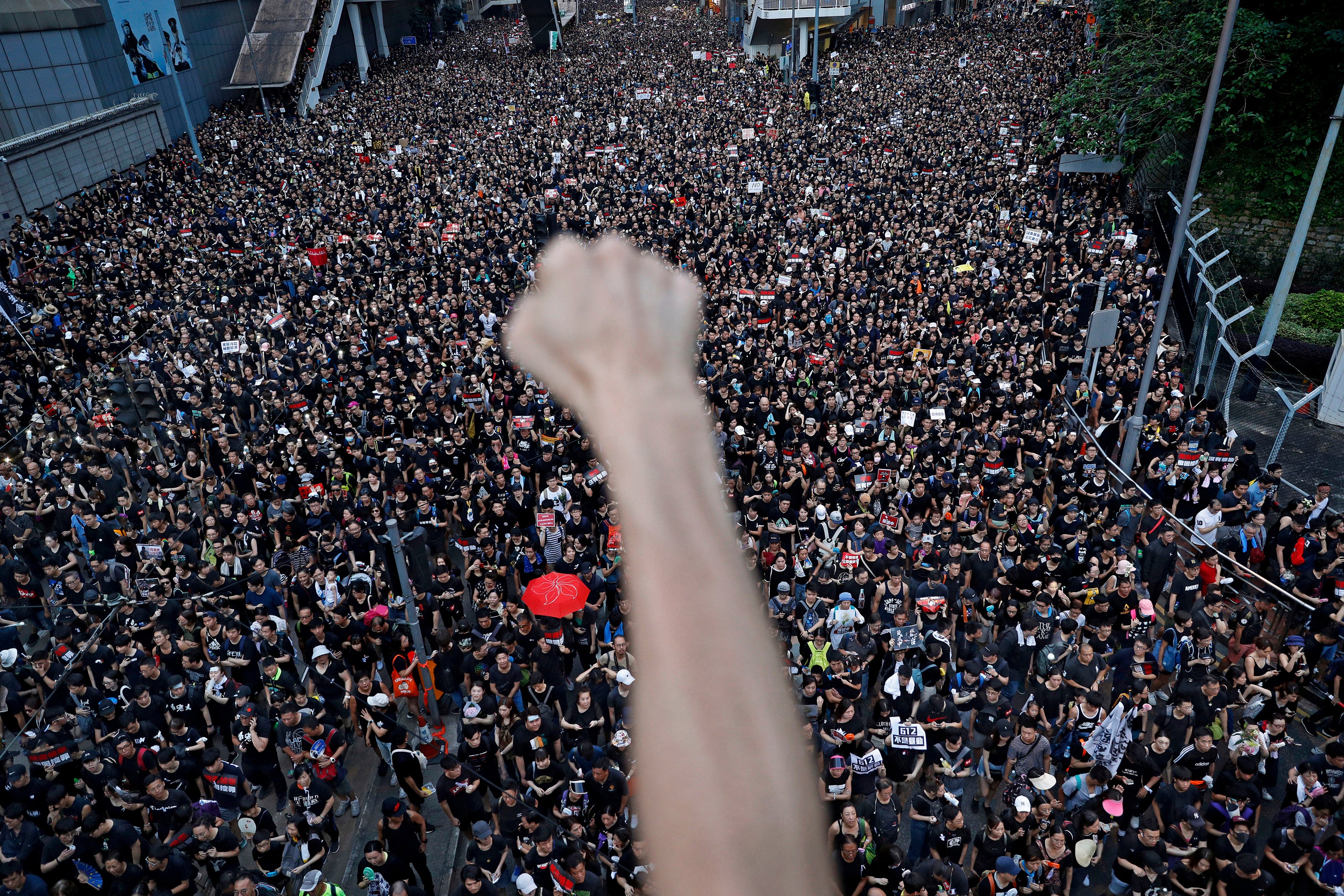 In this June 16, 2019, file photo, protesters march on the streets against an extradition bill in Hong Kong. Hong Kong’s protest movement has reached a moment of reckoning after protesters occupying the airport held two mainland Chinese men captive, and pro-democracy lawmakers and fellow demonstrators question whether the whole operation has gone too far. (AP Photo/Vincent Yu, File)

HONG KONG — On a recent sweltering Saturday, a day now reserved for protest in Hong Kong, a demonstrator named Wayne stepped past a row of plastic barricades, lifted a pair of binoculars and squinted.

It was a familiar sight for Wayne after more than two months on the front lines of Hong Kong’s turbulent pro-democracy demonstrations. Along with hard hats and homemade shields, face-offs with police have become part of the 33-year-old philosophy professor’s new normal.

The stories of Wayne and three other self-described “front line” protesters interviewed by The Associated Press provide insights into how what started as a largely peaceful movement against proposed changes to the city’s extradition law has morphed into a summer of tear gas and rubber bullets. They spoke on condition they be identified only by partial names because they feared arrest.

The movement has reached a moment of reckoning after protesters occupying Hong Kong’s airport last week held two mainland Chinese men captive, beating them because they believed the men were infiltrating their movement.

In the aftermath, pro-democracy lawmakers and fellow demonstrators — who have stood by the hard-liners even as they took more extreme steps — questioned whether the operation had gone too far.

It was the first crack in what has been astonishing unity across a wide range of protesters that has kept the movement going. It gave pause to the front-liners, who eased off the violence this past weekend, though they still believe their more disruptive tactics are necessary to get the government to answer the broader movement’s demands.

The demands grew from opposing legislation that would have allowed Hong Kong residents to be extradited for trials in mainland China’s murky judicial system to pressing for democratic elections, Hong Kong leader Carrie Lam’s resignation and an investigation into allegations of police brutality at the demonstrations.

The protesters on the front lines are the ones who throw bricks at police and put traffic cones over active tear gas canisters to contain the fumes. They have broken into and trashed the legislature’s chambers, blocked a major tunnel under Hong Kong’s harbor, besieged and pelted police headquarters with eggs and halted rush-hour subways by blocking the train doors from closing.

To Lam, these are “violent rioters” bent on destroying the city’s economy. To China’s ruling Communist Party, their actions are “the first signs of terrorism.”

To these most die-hard protesters, there’s no turning back.

“The situation has evolved into a war in Hong Kong society,” said Tin, a 23-year-old front-line demonstrator. “It’s the protesters versus the police.”

When Hong Kong’s youth banded together for this summer’s protests, they established a few rules: They would not have clear leaders, protecting individuals from becoming symbols or scapegoats. And they would stick together, no matter their methods.

The peaceful protesters would not disavow the more extreme, sometimes violent tactics of the front-liners, who would distract the police long enough for others to escape arrest.

These were lessons learned from 2014, when the Occupy Central pro-democracy movement fizzled after more than two months without winning any concessions. Many involved feel internal divisions partly led to defeat.

Chong, a 24-year-old front-liner, said everyone’s opinion is heard and considered, and they decide on the right path together. But no decision is absolute: The demonstrators have pledged to not impede actions they may disagree with.

Two massive marches roused Chong and others who had given up on political change after the failure of Occupy Central, also dubbed the Umbrella Revolution.

On consecutive weekends in June, hundreds of thousands of people took to the streets to oppose the extradition bill. It struck at fears that China is eroding civil rights that Hong Kong residents enjoy under the “one country, two systems” framework.

“I didn’t think I would ever do this again,” said Chong, who quit his job as an environmental consultant to devote himself to the protests. “But this time, society is waking up.”

On June 12, three days after the first march, protesters blocked the legislature and took over nearby streets, preventing the resumption of debate on the extradition bill. Police responded with tear gas and rubber bullets.

Lam suspended the bill indefinitely the day before the second march, but it didn’t mollify the protesters, who turned out in even greater numbers.

As their demands expanded, Lam offered dialogue but showed no signs of giving ground.

They blocked roads with makeshift barricades and besieged the Chinese government’s Liaison Office in Hong Kong, defacing the national seal over its entrance. Week after week, they clashed with police, who became an object of their anger. Every round of tear gas only seemed to deepen their conviction that the government did not care.

“We’ve had numerous peaceful protests that garnered no response whatsoever from the government,” said J.C., a 27-year-old hairstylist who quit his job in July. “Escalating our actions is both natural and necessary.”

Then came the “white shirt” attack. On July 21, dozens of men beat people indiscriminately with wooden poles and steel rods in a commuter rail station as protesters returned home, injuring 44. They wore white clothing in contrast to the protesters’ trademark black.

A slow police response led to accusations they colluded with the thugs. Police Commissioner Stephen Lo said resources were stretched because of the protests.

Many saw the attack as proof police prioritized catching demonstrators — around 700 have been arrested so far — over more violent criminals. That view has been reinforced by other images, including police firing tear gas at close range and a woman who reportedly lost vision in one eye after being hit by a beanbag round shot by police.

Each accusation of police brutality emboldens the hard-core protesters to use greater violence. Gasoline bombs and other flaming objects have become their projectiles of choice, and police stations are now their main target.

In this cauldron of growing rage, the protesters set their sights on Hong Kong’s airport.

While the major disruption of one of the world’s busiest airports got global attention, it was the vigilante attacks on two Chinese men that troubled the movement.

In a written apology the following day, a group of unidentified protesters said recent events had fueled a “paranoia and rage” that put them on a “hair trigger.” During the prior weekend’s demonstrations, people dressed like protesters had been caught on video making arrests, and police acknowledged use of decoy officers.

At the airport, the protesters were looking for undercover agents in their ranks. Twice they thought they found them.

The first man ran away from protesters who asked why he was taking photos of them. Protesters descended on him, bound his wrists with plastic ties and interrogated him for at least two hours. His ordeal ended only when medics wrested him away on a stretcher.

The second man was wearing a yellow “press” vest used by Hong Kong journalists but refused to show his credentials. In his backpack, protesters found a blue “Safeguard HK” T-shirt worn at rallies to support police.

A small group of protesters repeatedly beat him, poured water on his head and called him “mainland trash.” He turned out to be a reporter for China’s state-owned Global Times newspaper.

Footage of the mob violence inflamed anti-protester sentiment in China, where the reporter became a martyr. In Hong Kong, pro-democracy lawmakers said it was something that “will not and should not happen again.”

Within the movement, some apologized for becoming easily agitated and overreacting. Others questioned whether provocateurs had incited the violence.

Through it all, the front liners called for unity. They pointed to the injuries sustained on their side and the rioting charges that could lock them up for 10 years.

On the night of the airport beating, Wayne couldn’t get through the crowd to see what was happening, but he understood how the attackers felt.

“I would have done the same thing,” he said. “It’s not rational, but I would have kicked him or punched him at least once or twice.”