China warns revival of terror groups, including IS, in Syria 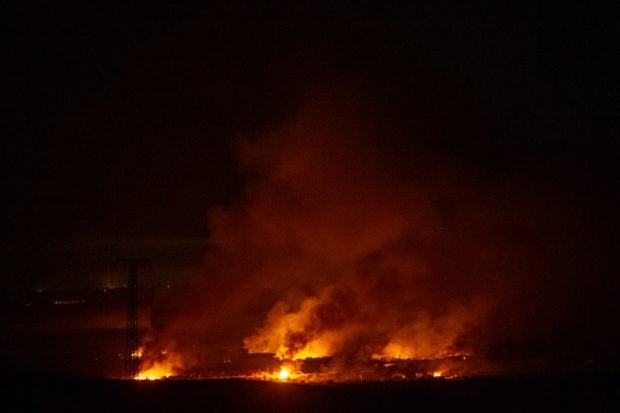 This picture taken in the eastern Syrian province of Deir Ezzor shows explosions following shelling by the US-backed forces on the Islamic State group’s embattled holdout of Baghouz, on March 11, 2019. Kurdish-led forces pounded the last scrap of land held by the Islamic State group in eastern Syria after hundreds more people surrendered. The jihadists once ruled over millions in a swathe of Syria and Iraq, but they have since lost all that territory except for a riverside slither of land near the Iraqi border. (Photo by BULENT KILIC / AFP)

GENEVA — China’s Syria envoy said Tuesday that “terrorist organizations,” including the Islamic State group, are being revived in the war-ravaged country, urging the international community not to ignore the “early warning” signs.

Xie Xiaoyan, Beijing’s point man for the Syrian conflict, made the comments after meeting in Geneva with the UN Special Envoy for Syria, Geir O. Pedersen.

“There is now a danger of terrorist organizations like ISIS being revived,” Xie told reporters, using another acronym for IS.  “The international community should pay attention.”

IS overran large parts of Syria and Iraq in 2014, proclaiming a “caliphate” there but offensives in both countries reclaimed the territory.

Xie’s Geneva visit came as concern mounts over a possible major offensive by President Bashar al-Assad’s forces on Idlib, a jihadist-run area in the northwest which is the last major opposition stronghold in Syria.

The UN has warned that an assault on Idlib could trigger a humanitarian catastrophe.

Idlib has for several years served as a reception zone for those escaping government advances elsewhere in the country, who now number in their hundreds of thousands.

Today they have nowhere to run in case of a full assault on Idlib.

Asked about Beijing’s position on a prospective of such an assault and the humanitarian fallout, Xie described the issue as “very complicated.”

“We all know that this is the last stronghold of some of the terrorist organizations… so this is an issue that needs to be dealt with,” he said.

“The fight against terrorism is not finished yet,” he added.

Since January, Idlib has been administered by the Hayat Tahrir al-Sham alliance, which is led by jihadists from Syria’s former Al-Qaeda affiliate. /kga