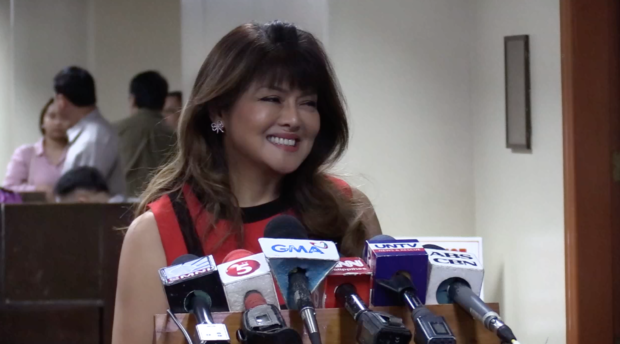 MANILA, Philippines — Senator Imee Marcos on Tuesday rejected the proposed revival of the anti-subversion law, saying that the law is “a relic of the Cold War era.”

“It is not ideology but criminal acts that should be punished,” Marcos said in a statement.

Marcos made the remark following Interior Secretary Eduardo Año’s proposal for the law to be restored amid reports of missing students after being allegedly recruited by leftist groups.

The senator explained that instead of reviving the law, “updating and upgrading the country’s anti-terrorism law” would provide a “stronger legal instrument than the Anti-Subversion Act of 1957 to punish crimes committed in the name of ideology, religion, politics, or economic gains.”

Marcos earlier filed Senate Bill 630 or the Anti-Terrorism Act of 2019, which seeks to impose the possible death penalty for crimes that may threaten the security of the public such as rebellion, insurrection, coup d’etat, arson, kidnapping, and hijacking, among others.

Further, the bill states that other violent acts which may “sow fear and panic among the public, threaten the government, or disrupt public services” are also considered acts of terrorism.

Under the Anti-Subversion Law, membership of the Communist Party of the Philippines (CPP) and “any other organization having the same purpose” is punishable by up to 12 years in prison.

Despite the call to revive the law, several senators had also rejected the call.

Senator Panfilo Lacson, who chairs the Senate Committee on National Defense and Security, said that reviving the anti-subversion law only encroaches the right to peaceful assembly and protest while Senate Minority Leader Franklin Drilon underscored that being a member of any organization is not a crime.

For its part, the Palace said the proposal needs to be studied.