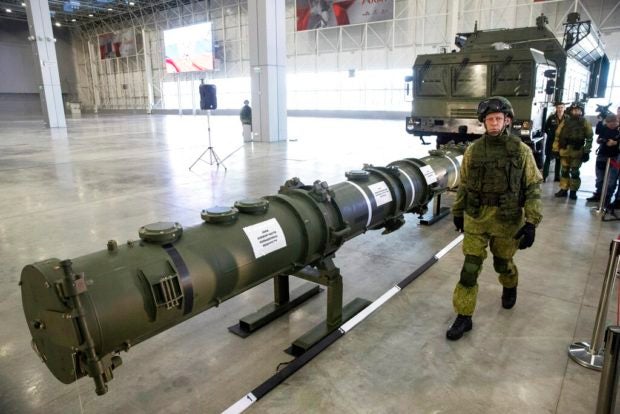 This Wednesday, January 23, 2019 file photo, shows the 9M729 land-based cruise missile in Kubinka outside Moscow, Russia. Washington and Moscow walked out of the Intermediate-range Nuclear Forces treaty that President Ronald Reagan and Soviet leader Mikhail Gorbachev signed in 1987, raising fears of a new arms race. The U.S. blamed Moscow for the death of the treaty. (AP Photo/Pavel Golovkin, File)

MOSCOW — Moscow on Tuesday said the United States was ramping up military tensions by testing a medium-range cruise missile weeks after tearing up a pact with Russia.

“This is all a cause of regret. The US has obviously taken a course towards escalation of military tensions. We won’t react to provocations,” Russian deputy foreign minister Sergei Ryabkov told state news agency TASS.

US announced Monday that it had tested a type of ground-launched missile that was banned under the 1987 Intermediate-Range Nuclear Forces (INF) treaty with the Soviet Union.

The missile was launched from the US Navy-controlled San Nicolas Island off the coast of California.

The launch was a sign of Washington beefing up its capabilities in the wake of the collapse of the INF on August 2.

Many fear the end of INF, which Washington accused Moscow of having violated in recent years, will lead to a new and dangerous nuclear arms race.

“We will not allow ourselves to get drawn into a costly arms race,” Ryabkov said.

He added that Moscow would stick to a unilateral moratorium on such missile systems “if and when we get them, as long as the US does not deploy them anywhere in the world.”

INF banned all land-based missiles, conventional and nuclear, that could travel between 500 and 5,500 kilometers (310 and 3,400 miles), in an effort to abolish the class of nuclear arms that then most threatened Europe.

Ryabkov said that the test, just over two weeks after the US withdrew from the treaty, showed that it had been working on such missiles for a long time ahead of the withdrawal. /kga

ADVERTISEMENT
Read Next
About 100 UP-Tacloban students join protest vs plan to deploy cops, soldiers in campuses
EDITORS' PICK
A gem of a residence in the new normal
Water remains our saving grace right now
Health workers from other regions eyed as ‘substitute’ for NCR frontliners
Smart 5G goes live
PNP: Checkpoints back in MECQ areas
MECQ guidelines in infographics
MOST READ
MECQ guidelines in infographics
MECQ in NCR, other areas: Mass transportation suspended, quarantine pass required anew
Doctors group to Duterte: ‘There was never a call for a revolt’
Want higher pay? Join the police force, Duterte tells nurses
Don't miss out on the latest news and information.