In a mountainous area north of Tokyo, a priest blows a conch shell as Yuichiro Yamamoto bows and thanks the nature gods for this year’s “good harvest”: natural ice.

Yamamoto is one of Japan’s few remaining “ice farmers,” eschewing the ease of refrigeration for open-air pools to create a product that is sold to high-end shaved ice shops in trendy Tokyo districts.

His trade had all but disappeared in recent decades, and the shaved ice or “kakigori” that is popular throughout Japan in summer had been produced with cheap machine-made ice. 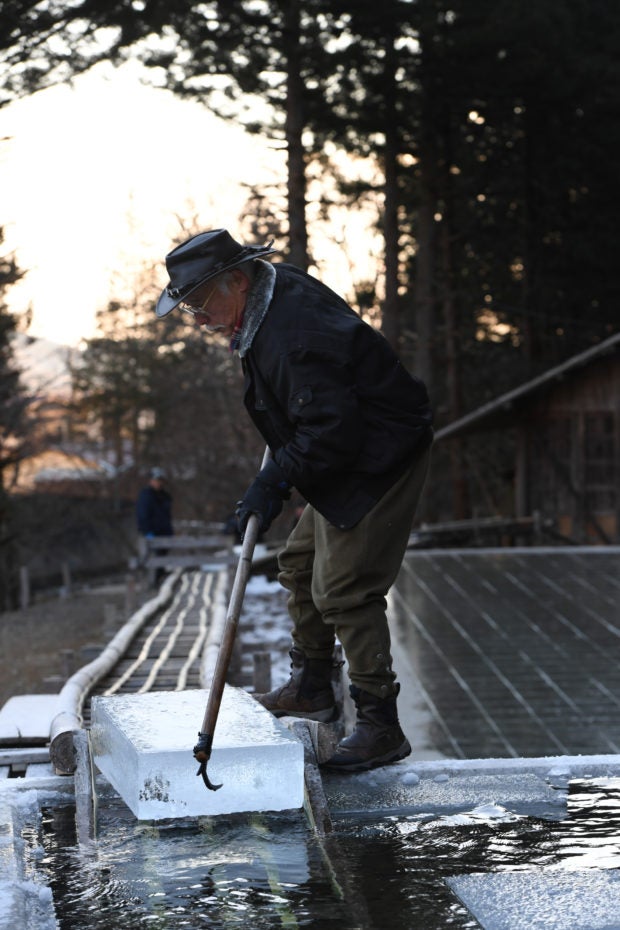 Yuichiro Yamamoto, an ice farmer running the natural ice factory, pulls a block of ice onto a bamboo rail from a pond in Nikko,  prefecture on Jan. 10, 2019. Image: AFP/Toshifumi Kitamura

But reinventing natural-made ice as a high-end artisanal product has helped revive the sector and save his firm.

“When I started making natural ice, I wondered how I should market it. I thought I needed to transform ‘kakigori,'” Yamamoto told AFP at his ice-making field in the town of Nikko, north of Tokyo.

Yamamoto took over a traditional ice-making business 13 years ago in Nikko, where he also runs a leisure park.

At the time, shaved ice cost just ¥200 ($2) in the local area and Yamamoto, who was fascinated by traditional ice-making, knew he could not make ends meet.

“My predecessor used to sell ice at the same price as the fridge-made one, which can be manufactured easily anytime throughout the year,” the 68-year-old said.

The situation made it “impossible” to compete he explains, as producing natural ice is labor-intensive.

Instead, he decided to transform cheap “kakigori” into a luxury dessert, made with his natural ice and high-grade fruit puree rather than artificially flavored syrup.

After months of research, he began producing his own small batches of artisanal “kakigori.”

At first, there were days he threw away tonnes of ice because he could not find clients.

But one day buyers from the prestigious Mitsukoshi department store discovered his product and began stocking it, turning around his fortunes.

Kakigori dates back to the Heian Period (794 to 1185) when aristocratic court culture flourished in the then-capital of Kyoto.

It was a rare delicacy reserved for the rich, with the ice naturally made and stored in mountainside holes covered with silver sheets.

It was only after 1883 when the first ice-making factory was built in Tokyo, that ordinary people could taste the dessert.

With the development of ice-making machines, the number of traditional ice makers dropped to fewer than 10 nationwide.

The story is one familiar to many traditional Japanese crafts and foodstuffs, with expensive and labor-intensive products losing ground as cheaper, machine-driven versions become available.

And making ice naturally is a grueling task.

The season begins in the autumn when workers prepare a swimming-pool-like pit by cultivating the soil and pouring in spring water.

Thin frozen initial layers are scraped away along with dirt and fallen leaves.

The ice-making begins in earnest in the winter, when water is poured in to freeze solid, but it must be carefully protected. Producers regularly scrape off the snow that can slow the freezing process.

And rain too can ruin the product, causing cracks that mean the whole batch has to be discarded.

“I check the weather forecast 10 times a day,” Yamamoto laughed.

Once the ice is 14 centimeters (5.5 inches) thick, which takes at least two weeks, workers begin cutting out rectangular blocks.

Each block, which weighs about 40 kilograms (88 pounds), is glided into an ice room filled with sawdust on a long bamboo slide.

The blocks are sold to some of Tokyo’s high-end shaved ice shops as well as department stores.

In the Yanaka district, more than 1,000 people queue up every day for a taste of “kakigori” made with natural ice produced by another ice-maker from Nikko.

Owner Koji Morinishi says the naturally made ice has a texture that is different from machine-made products.

“It feels very different when you shave it. It is harder because it is frozen over a long period of time,” Morinishi explained.

“It is easier to shave really thin if the ice is hard. If not hard, it dissolves too quickly.”

Morinishi himself struggled when he first opened the “kakigori” shop but has gradually built a cult following for his desserts topped with purees of mango, watermelon, peach or other fruit.

And Yamamoto’s firm has seen demand soar, he now harvests 160 tons a year and knows two new producers who have entered the market.

“This business has become attractive and the ice makers are all busy,” Yamamoto said. HM/JB