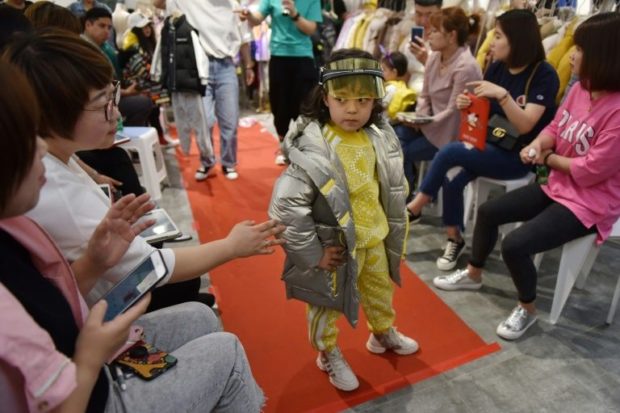 Manicured children strut down the catwalk at a Beijing fashion show, one of the thousands of events driving huge demand for child models in China that insiders warn leaves minors vulnerable to physical abuse, 12-hour-days and unrelenting pressure from pushy parents.

The kids’ apparel market is growing faster than any other clothing sector in the country and was worth more than $40.5 billion in 2018, according to Euromonitor.

This combined with the rise of “kidfluencers” sponsored by brands to promote products on social media is spurring greater demand for young models, but experts warn of the heavy cost of pursuing such deals.

“If children do not listen to the parents then I think hitting them is quite standard,” Lee Ku, founder of Le Show Stars modeling school, told AFP.

A video of a mother kicking her 3-year-old daughter in fury at her failure to comply during a modeling job went viral earlier this year, causing outrage online.

But in an industry where minors can earn 10,000 yuan ($1,450) a session, Lee says the clip is the tip of the iceberg and that from his experience, such violent behavior from parents was not unusual on shoots.

Child models sometimes go through more than 100 outfit changes in a session, often working from morning till night.

But mental health experts warn it is not just physical exhaustion they have to contend with, there may be long term emotional implications.

“Children from the age of 0 to 6 are mentally developing, they need a lot of exploration and freedom,” child psychologist Gong Xueping explained.

“At work, the child model will deliberately show a lot of different expressions… but this is contrary to the child’s own feelings of the moment. This limits the development of both emotional abilities and more complex psychological abilities for children, so I think it is a very bad choice,” Gong added.

But there remains no shortage of parents interested in pushing their children into the profession.

Founded three years ago, Le Show Stars was one of the first modeling schools in Beijing, where customers pay up to 800 yuan (over $100) for private one-on-one lessons.

Four-year-old twins Yumi and Yuki Xiao are not yet professional models but for nearly two years they have been taking classes where they are taught how to pose and pace the catwalk in the hopes that they can break into the industry.

“For some catwalking competitions, they have to be in the makeup room by 6 a.m.,” their father Xiao Liang said.

Their parents invest in taking them around the country to compete in hundreds of national child modeling competitions.

“It is a lot of fun I like being on stage,” Yumi insisted.

Like many other parents, Xiao says he initially enrolled the two in child modeling to build their self-confidence, but after Yumi and Yuki showed interest they started to invest more time and money into building a possible child modeling career path for them.

Occasionally, the twins are paid to model seasonal fashion lines for big brands.

“I think they are one of a kind, firstly, they are twins, and they are also boy-girl twins,” father Xiao says proudly.

“They also like it, which is why we are giving them this opportunity. I think they have a natural advantage over other kids,” he added.

China’s laws around child labor are complicated and parents of underage models are sometimes paid in secret to sidestep the red tape required to employ them.

Responding to the kicking video, Hangzhou authorities introduced regulations to limit the hours children work and ban children under 10 from being brand spokespeople.

But many feel authorities are doing too little to protect kids from exploitation.

More than 110 child retailers on e-commerce giant Taobao said they would scale back the use of young models, and also demanded more regulations.

Thousands have debated the topic online, calling for rules to be tightened to prevent abuse.

“To me, child models are nothing different from child labor. They have to finish their work no matter how tired they are when other children are playing and their short childhoods are lost making money for their parents. I suggest that we step up legislation…to protect their rights and interests,” one Weibo user said.

Another commented some parents see their offspring only as a “money-making tool” adding, “The only way is to strengthen regulation, supervision and protection.”

Xiao and his wife Bai Yu said they were aware of the potential pitfalls of the profession and any decision to pursue the profession would be up to their son and daughter.

He said, “If they study well and they are interested in the prospect (of being a model), then I am sure to be 100% supportive, as long as they are willing to spend their energy in this area.” HM/JB