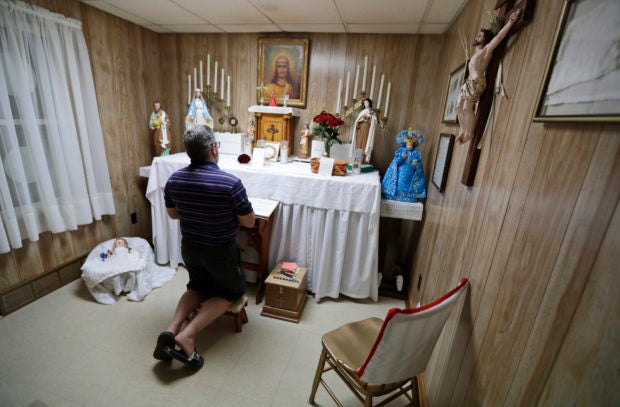 Ron Sattler kneels and prays in front of the altar in Canton, Ohio. Image: AP/Tony Dejak

CANTON, Ohio — Late in the summer of 1939, crowds of strangers started showing up at Rhoda Wise’s house next to a city dump in Ohio after she let it be known that miracles were occurring in her room.

Eight decades later, people still make pilgrimages to the wood frame bungalow at the edge of Canton, Ohio, seeking their own miracles. Wise died in 1948, but her legend as a Christian mystic has blossomed over time. And last fall, after years of discussions, the local Roman Catholic diocese petitioned the Vatican to make Wise a saint, renewing interest in her former home.

The story starts with the sickly Wise, who lived with her alcoholic husband and young daughter, claiming she was healed of a terminal illness and was visited by Jesus Christ as she suffered in her bed. 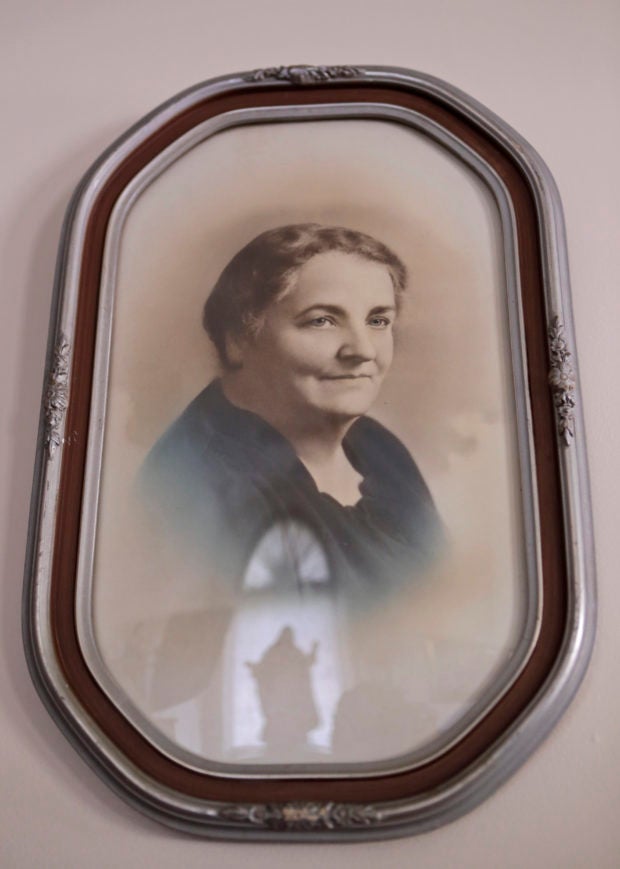 When word got out, people began arriving at all hours, seeking spiritual guidance and asking to see the wooden chair where Jesus sat. They stood in lines around the block to file past her bed when she appeared to suffer stigmata — bloody wounds on her head, hands and feet like those Jesus suffered on the cross — until she implored the church to take her off display.

The parade of pilgrims slowed down after Wise’s death but never stopped. Her house — now with beige vinyl siding and a good-sized parking lot — has remained an under-the-radar destination for the faithful and curious.

The cloth that was around Rhoda Wise when she suffered the phenomenon of stigmata, bloody wounds on her head, hands and feet as those Jesus suffered on the cross, is on display in Canton, Ohio. Image: AP/Tony Dejak

Her former home is one of dozens of Catholic shrines and pilgrimage sites in the United States, ranging from modest to grand.

Among them are one of the largest crucifixes in the world in the woods of Michigan, an altar inside a 50-foot-high cave carved into a cliff in Oregon, and a small chapel in Minnesota built as a tribute to the Virgin Mary, to whom the locals prayed when a plague of grasshoppers devastated crops in the 1870s.

In 1996, a popular shrine developed in the parking lot of an office building in Clearwater, Florida, where thousands believed a 60-foot image of Mary had appeared on the mirrored glass. That lasted until 2004 when a high school boy with a slingshot shattered some of the panes.

The Wise house stands out because it does not stand out, blending in with a row of Habitat for Humanity homes, built across the street in recent years, and the rest of the frayed residential neighborhood. These days, there is a golf course where the dump used to be. 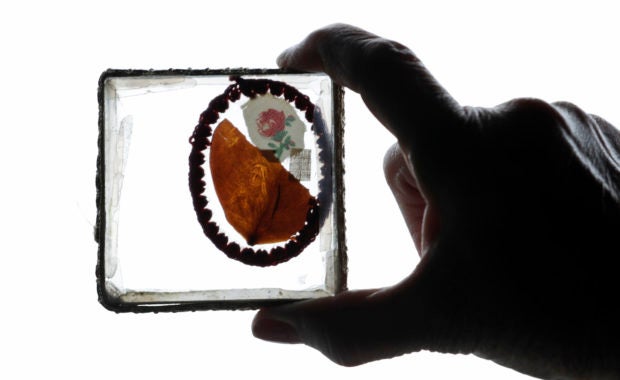 A rose petal from the 1940s, a piece of stigmatic clothes from a wound when she bled and a piece of Rhoda Wise’s dress are held up in Canton, Ohio. Image: AP/Tony Dejak

Regardless of the validity of the Rhoda Wise narrative — scoffers note that she was known to have mental health problems — people still arrive by the busload. They come to view her 9-foot-square bedroom, pray and sit in the Jesus chair, which has been repaired numerous times through the years and now is painted gold. There is no admission fee. Donations pay the bills.

Canton native Karen Sigler, 66, visited with a group in the early 1980s and was recruited by Wise’s daughter Anna Mae to become the live-in caretaker, a position she has held now for 36 years.

“We live in a world that is really hard to have faith in today. Really hard,” Sigler said, trying to explain the attraction. “A lot of people want to hold on to it. And Rhoda’s strength to endure everything she did with such a great love of God is an inspiration for them.”

Precise numbers are not kept, but a guest book shows visitors from more than a dozen states and Canada since late spring. Most are already believers, like 49-year-old Denise Kleinhenz. She came with her family recently from their home on the other side of the state. 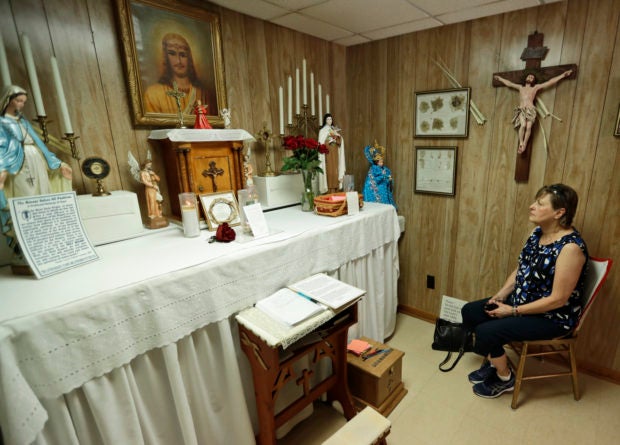 Marge Ruminski, from Parma, Ohio, sits in the chair where Rhoda Wise was visited by Jesus Christ in front of the altar in Canton, Ohio. Image: AP/Tony Dejak

“She saw Jesus,” said Kleinhenz, with wonder in her voice. “And he came more than just once. It just makes me think about, that he exists.”

The room where Wise was bedridden for years now is an altar room crowded with statues and relics. Bandages claimed to be those that absorbed Wise’s blood during stigmata are mounted in frames on the wall. Photos of Wise bleeding from the head and hands also are displayed.

The “Acts of the Case” advocating for her sainthood have been sent to Rome, but the next steps of the arduous process could take years.

Whether scientific explanations might exist for things that happened to Wise makes little difference by now, said Michele Dillon, a University of New Hampshire sociology professor who has written on Catholic beliefs. 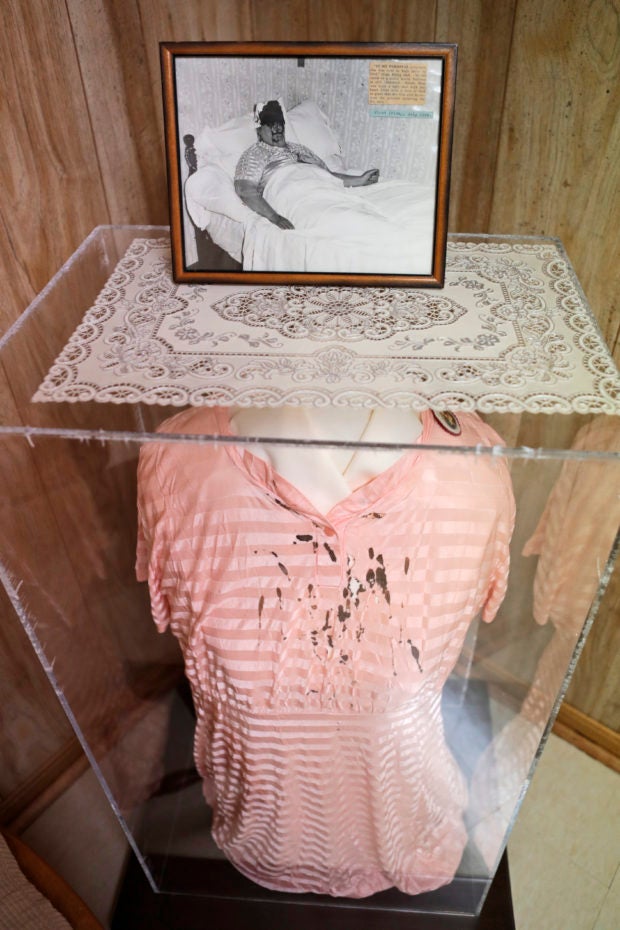 Editor’s note: GRAPHIC CONTENT – a photograph of Rhoda Wise and the dress she wore in the photo when she suffered the phenomenon of stigmata, bloody wounds on her head, hands and feet like those Jesus suffered on the cross, is displayed in Canton, Ohio. Image: AP/Tony Dejak

Nobody can prove or disprove that miracles occurred at the house or as a result of people visiting and praying there, Dillon said. And the continued involvement of the church has given the story a stamp of legitimacy.

“People do believe in prayer and miracles,” Dillon said. “And there is also a social piece to that — if so many others are going, they must be on to something. If the story is compelling, it will attract a following.”

One of Wise’s granddaughters, 71-year-old Darlene Zastawny, was raised in the house and still stops around to talk to visitors. Her earliest memories, she said, involve strangers showing up at the door.

“I always wondered who all these people were that my mother would let in,” she said. “I would be getting ready for school when I was little and there would be a stranger sitting with us because she would not tell them no. I knew it was special, but sometimes I wished it was more of a home. There was somebody coming all the time, but you get used to it.” HM/JB