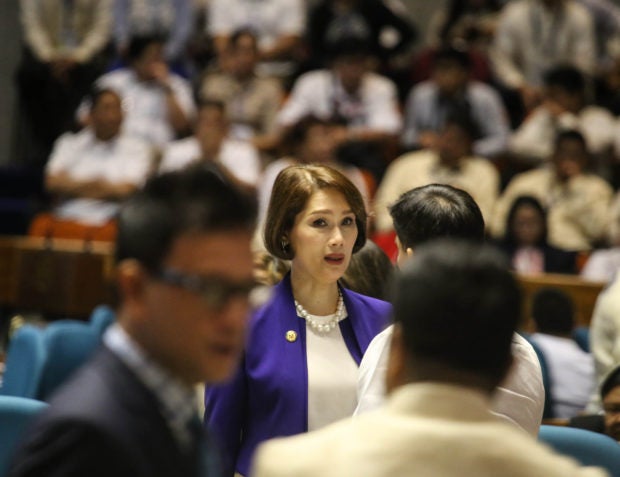 On Wednesday, the Senate President said members of the LGBT (lesbians, gays, bisexuals, transgenders) community should be called “homo sapiens” instead.

“Why the lengthy letters? Why not just Homo Sapiens? We’re all the same,” Sotto said.

READ: LGBTIQA+? ‘Why not just Homo Sapiens? We’re all the same’ – Sotto

Meanwhile, Senators Panfilo Lacson and Aquilino Pimentel III reportedly worried that allowing transgender people to use toilets for the opposite sex might be exploited by voyeurs.

“I think Sen. Tito Sotto was trying to be funny, that is his usual self. But you know, the term homo sapiens is irrelevant really. We want a toilet that will respond to the needs of all people regardless of their gender identity,” Roman, the first elected transgender woman in Congress, said in an interview over ABS-CBN New’s Headstart.

The congresswoman also said it is wrong to suspect transgender people of committing voyeuristic acts when it can be done by any people, regardless of gender.

“Now, with regard to Senator Ping Lacson’s observation… Only women are allowed to enter restrooms in many establishments in Metro Manila, how do we really guarantee that none of those have bad intentions? To my knowledge, we enter the restroom only to relieve ourselves, this is a right to health,” Roman explained.

Asked if suspecting a transgender would be wrong, she answered: “Yes, you don’t have to.”

“It’s stereotyping transgender women and it’s very difficult to guarantee this, it’s really a question that you have to ask of all people. It’s really absurd to have to ask this question,” Roman continued.

Roman also admitted being “disappointed” with the Senate for supposedly “delaying” the passage of the sexual orientation and gender identity and expression (SOGIE) equality bill during the past 17th Congress.

Gretchen Diez was arrested for unjust vexation after she documented how a janitress denied her entry to a women’s toilet at Farmers Plaza mall in Quezon City Tuesday. Roman said the discriminatory incident should prompt President Rodrigo Duterte to certify as urgent the SOGIE bill.

Despite an apology from the mall establishment and personnel, Diez said she would pursue filing charges for violations of the Quezon City “Gender-Fair City Ordinance.” Her lawyer is also eyeing civil suit of slight physical injuries and unjust vexation. /jpv