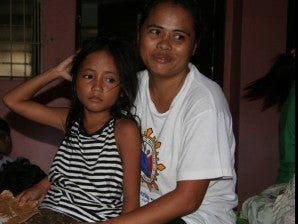 This is what 7-year-old Jennylou Yecyec found out during the devastating flood that swept her and countless others away from Isla de Oro and the other villages here late Friday.

When the rampaging waters came and rose,  Jennylou, her parents Nilo and Marilou, and her brother Mark decided they should get to the roof of their house.

Marilou said they believed they were safe there, as their neighbors did. They were  wrong.

Their house—made of light materials—did not have a chance against the 30-foot torrent.

Soon, the Yecyec family found themselves bobbing in the rampaging waters.

Marilou said she managed to grab a piece of wood from the debris of demolished houses and held on to it with Jennylou while her husband and son and their pet family dog struggled against the strong current.

A whirlpool that came out of nowhere swallowed every one of them, along with dozens of other people.

Marilou said Jennylou and the dog—which her family has had for three years—got separated from the rest.

The girl recounted that while gasping for breath, the dog—pregnant at the time—tried hard not to drift away from her.

As she gasped for air, Jennylou said the dog would bump her lightly, as if trying to tell her something.

“So I rode piggybacked on her and she did the swimming,” Jennylou said.

Out in the open sea, Jennylou said the already exhausted mongrel navigated towards a plank of wood floating nearby. As soon as she held on to the wood, she said the dog sank and was never seen again.

At daybreak, rescuers on rubber boat plucked Jennylou and several others from the sea.

At an evacuation center, she would later be reunited with the rest of her family, who also survived the nightmare. There were profuse expressions of gratitude when the missing member turned up.

“I would have died if not for our dog,” Jennylou said.

Read Next
With family in mind, man floats for 30 hours
EDITORS' PICK
Get exciting deals and discounts when you download the new McDonald’s App
SM continues to send relief assistance to remote towns in Batangas
Palace: US Senate move also made Duterte junk VFA
Year of metal Rat: ‘Rooster’ Duterte warned of scandals
China expands lockdown against virus, fast-tracks hospital
‘A greener, cleaner tomorrow’: A how-to guide for Filipinos who want to help with today’s energy crisis
MOST READ
No time for revelry; Tagaytay instead plans for alert level 5
Palace: US Senate move also made Duterte junk VFA
Virus scare: 600 Chinese from Wuhan must leave PH by Jan. 27
Philippines orders 12 helicopters from Russia—Duterte
Don't miss out on the latest news and information.