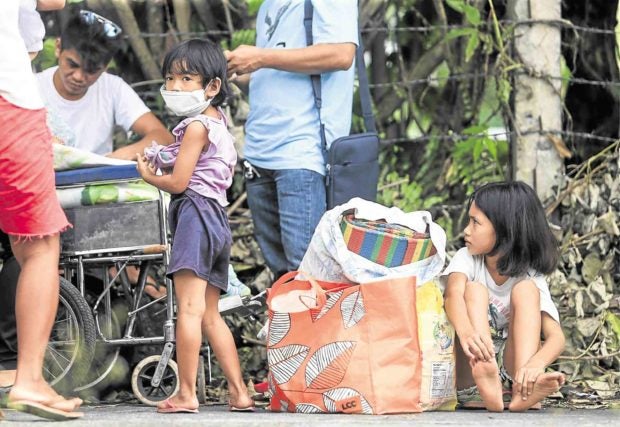 NO ONE LEFT BEHIND Children and persons with disabilities are among the people prioritized in an evacuation simulation held recently at Barangay Lidong in Sto. Domingo, Albay province. The village is the nearest community to Mt. Mayon and is vulnerable to lahar flow from the volcano’s slopes. —MARK ALVIC ESPLANA

LEGAZPI CITY, Albay, Philippines — The Department of Tourism (DOT) in Bicol has issued a travel advisory for local and foreign tourists to temporarily avoid areas in the region identified as dengue hot spots by health authorities.

Benjamin Santiago, DOT director in Bicol, said the advisory was issued after the Department of Health (DOH) declared a national dengue epidemic because of the rising cases of the mosquito-borne disease.

“We strongly enjoin tourists to temporarily avoid visiting areas identified by DOH as hot spots as a health preventive measure,” he said.

Records from the regional epidemiology surveillance unit of the DOH showed that 104 villages in Bicol had rising dengue cases as of Aug. 7.

In Camarines Sur, 45 villages were listed as dengue hot spots, followed by Albay with 22; Sorsogon, 17; Catanduanes, 15; and Masbate, five.

Santiago, however, declined to name the tourist attractions in villages considered as hot spots but asked visitors to protect themselves and avoid areas where disease-carrying mosquitoes breed. Among the popular sites in the region are beach resorts and lakes.

He said the advisory would remain until the DOH issued a health bulletin clearing the hot spot areas.

Ernie Vera, DOH director in Bicol, said that from January to Aug. 3, the department had recorded 4,241 dengue cases with 40 deaths.

The number was 157 percent higher than the 1,653 cases with 18 deaths during the same period last year.

Camarines Sur had 1,706 dengue cases, with 17 deaths, followed by Sorsogon with 784 cases and eight deaths. In Albay, there were 79 dengue cases with 10 deaths; Catanduanes, 563 with one death; Masbate, 271 with two deaths; and Camarines Norte, 144 with two deaths.

Governors Francis Escudero of Sorsogon and Antonio Kho of Masbate have issued orders declaring cleanup and sanitation campaigns in all towns and villages. —Mar S. Arguelles