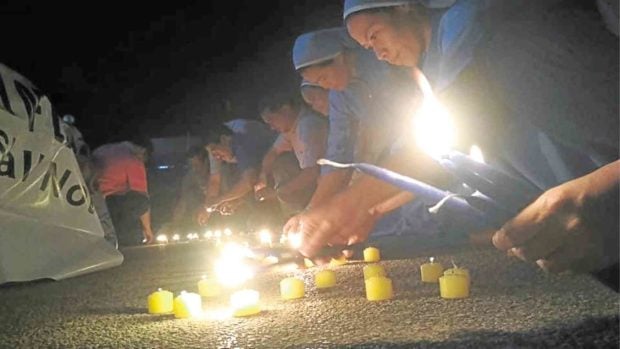 LIGHT FOR PEACE Members of religious groups light candles in San Carlos City to call for peace amid killings on Negros Island. —PHOTO FROM FACEBOOK PAGE OF PAGHIMUTAD

ILOILO CITY, Iloilo, Philippines — Church leaders of various denominations have joined demands for justice for victims of the spate of killings on Negros Island.

Jaro Archbishop Jose Romeo Lazo, as well as clergy, religious and lay faithful in the diocese, has condemned the extrajudicial killings.

“We continue to pray for justice for those who were unjustly killed and for the end of this tension, so that peace and order will prevail throughout their lands,” according to a statement issued by the diocese’s commission on social communications.

The Defend Negros #StopTheAttacks network has recorded the killing of 87 civilians in the provinces of Negros Occidental and Negros Oriental since January 2017.

The bloodiest day in July was on the 25th when seven died in separate shooting incidents, including 1-year-old boy Marjon Ocampo in Sta. Catalina town, Negros Oriental.

Police and military officials have blamed the killings on the New People’s Army but the rebels have accused “death squads” composed of policemen, soldiers and paramilitary troops as behind the attacks.

Church leaders and civil society groups in Cebu have also condemned the killings in Negros and of drug suspects.

“We call on the authorities, especially the government, to immediately resolve and find ways to stop the bloody incidents in Negros and other parts of the country,” according to the statement.

Among those who signed the statement were Cebu Archbishop Jose Palma, Bishop Feliciana Tenchavez of the West Visayas Jurisdictional Area of the United Church of Christ in the Philippines, Rt. Rev. Alger Loyao of the Iglesia Filipina Independiente-Diocese of Cebu and Rev. Fr. Benjamin Alforque of Stop Attacks movement.

The National Council of Churches in the Philippines (NCCP), which groups 10 Protestant churches and organizations in the country with around 10 million members, also called for justice.

“As a Christian council, we commit ourselves to stand in solidarity with the victims of murder and harassment in Negros. We stand with them as they cry out for the killings and attacks to stop,” the NCCP said in a statement.

The Philippine Ecumenical Peace Platform voiced support for the appeal of San Carlos Bishop Gerardo Alminaza not to impose martial law on the island and for the resumption of peace negotiations between the government and communist rebels.

At least 20 Cebu-based artists and band members staged a rally in downtown Cebu City on Sunday to denounce the killing of farmers in the Visayas and other parts of the country.

“We want people to know that farmers, too, have rights. Now, they seemed to be a target of the killings. All we want for them is land, not bullets; food, not bombs,” Janry Ubal, one of the coordinators of the “Food not Bombs” movement, said in a telephone interview.