Disaster preparedness a must for Albay village at Mayon’s foot 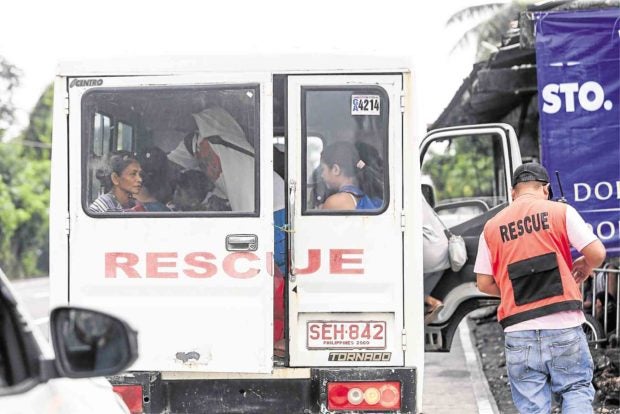 STO. DOMINGO, Albay, Philippines — Lidong in this town is the nearest community to Mt. Mayon and lies within the 6-kilometer permanent danger zone of the active volcano.

Recently, the local government and nongovernmental organizations involved in disaster response chose Lidong as site of an evacuation simulation to test the community’s preparedness in case heavy rains wash down lahar deposits from Mayon’s slopes.

Jeneth Sega, 37, who was designated team leader in the simulation, said she felt a sense of success when she was able to “save” her fellow villagers.

The exercise involved Sega and other team leaders guiding hundreds of residents in an abrupt evacuation using the local government’s rescue vehicle to transport them to an evacuation center some 3.5 kilometers away.

The exercise, dubbed “Andam Lahar,” was meant to prepare them for the possibility of Mt. Mayon’s lahar flow that could wipe out the entire community. “Andam” in Bicol means to get ready or to prepare.

David Gazashvili, country director for CARE International, said the exercise tested how well the local government and communities developed and executed their preparedness and evacuation plan.

Gazashvili said those involved in the activity also wanted to raise their awareness of the risks related to lahar and how communities could minimize and deal with its impact.

“I felt like I’m a hero because even without exerting too much effort, I was able to convince the 100 people in Purok (zone) 3 to participate in the exercise,” Sega said.

For Baby Lyn Canapit, joining the exercise meant learning how best to assist her child, 5-year-old John Rick, who has cerebral palsy, during an emergency situation.

Juanita Echaluce, 67, who has been joining evacuations whenever calamity strikes the province, said she was impressed with the conduct of the exercise.

“This is the very first time that there are team leaders and medical, security, communication and transport leaders in the evacuation process, and I’m hoping this will be realized when the scenario [laid down by the exercise] happens,” Echaluce said.

She said lack of food supplies, clogged toilets, shortage of drinking water and medicine should no longer be a problem in evacuation centers as it was demonstrated in the simulation exercise.

Sto. Domingo Mayor Joseling Aguas Jr. said the activity enabled them to identify the “strengths and weaknesses” in their evacuation plan.

“And the best thing is the cooperation of [our people]. I’m very happy with the response … With a positive attitude, [attaining the target of] zero casualty in times of disasters is not impossible,” Aguas said.

Citing problems in transporting evacuees, the mayor said he would meet with local jeepney operators so they could be tapped during evacuations.