At Feast of Sacrifice, Marawi folk seek end to their own sacrifice of homelessness 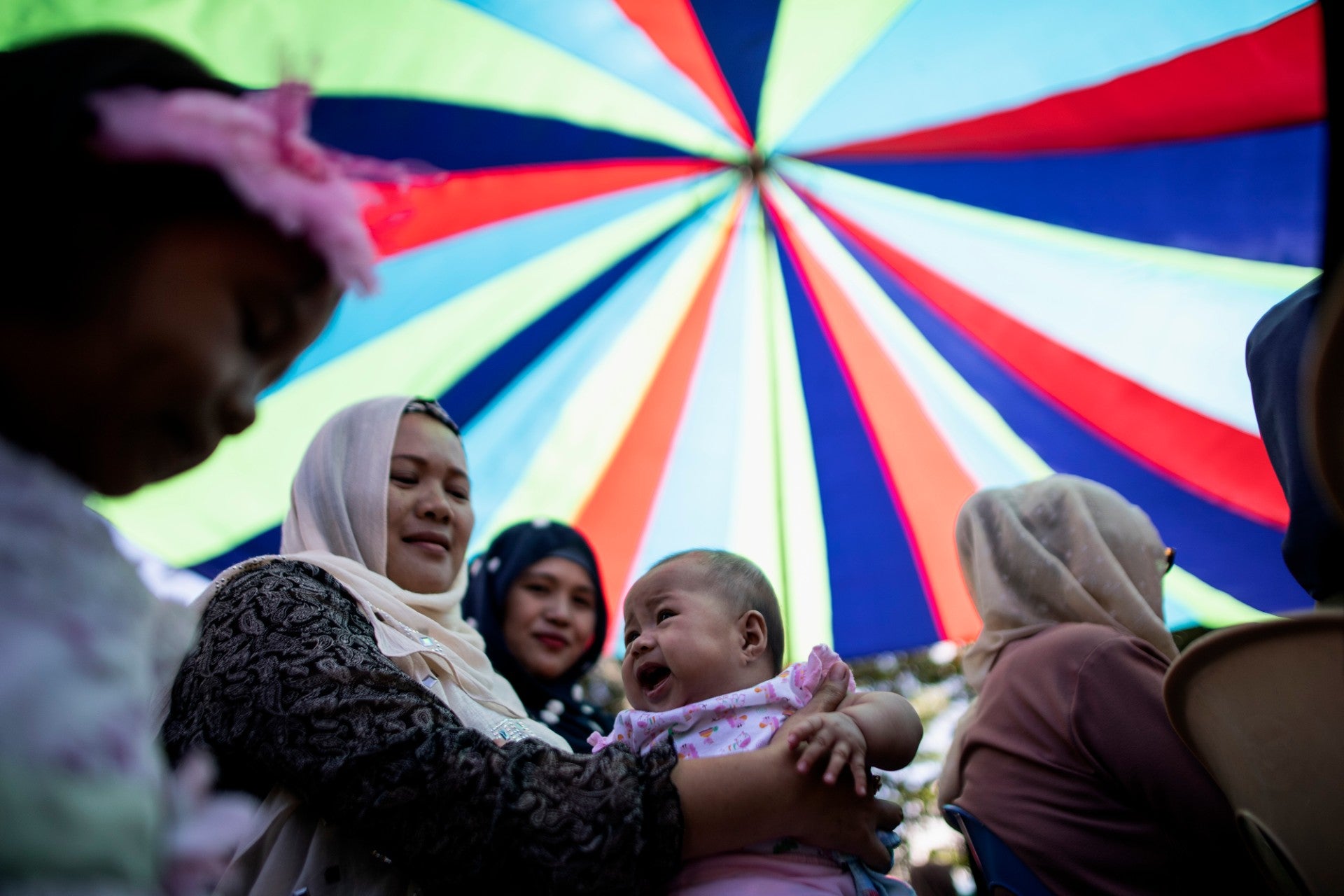 Muslim women gather during an event in Marawi on the southern island of Mindanao on May 23, 2019, to mark the May 23, 2017 invasion by jihadists that sparked a five-month battle in the southern city. Two years after the Philippine city of Marawi was overrun by jihadists it remains in ruins, with experts warning that stalled reconstruction efforts are bolstering the appeal of extremist groups in the volatile region. Noel CELIS / AFP

CAGAYAN DE ORO CITY—Residents of war-ravaged Marawi City are pleading for an end to their sacrifice of being kept away from their homes as Muslims nationwide celebrated Eid’l Adha, or the Feast of Sacrifice, last Sunday (Aug. 11).

As Eid’l Adha was celebrated, Marawi leaders bewailed their absence in their community for the feast, urging Task Force Bangon Marawi (TFBM) to fast track rehab work in the city ravaged by a five-month war sparked by an attempt to establish an Islamic State caliphate in the country’s only Muslim city.

Aga Khan Sharief, a Marawi leader, said the people of Marawi were eager to rebuild their homes and buildings even without government help.

“We are fed up,” he said. “We will reconstruct our lives even without government help,” he added.

President Rodrigo Duterte in April also expressed frustration at rebuilding efforts in Marawi, saying he would let people of the city rebuild their communities instead.

“I don’t think that I should be spending for their buildings,” Duterte said in a speech at the Pampanga provincial capitol.

“The people there have a lot of money,” the President said in Filipino. “Every Maranao, there is a businessman. Those who are into shabu are included.”

“They have money. The debate there is whether I would also be building the same kind that they lost. I don’t think I’m ready for that,” the President said.

Samira Gutoc, a Marawi native and former senatorial candidate, said the celebration of Eid’l Adha was different for Muslims who are not in the comfort of their homes and communities.

“Marawi will never be Marawi again if we are not free to walk in these two places,” she said.

Eid’l Adha is one of the most important Islamic feasts. It commemorates the willingness of Ibrahim (also known as Abraham) to heed Allah’s command to sacrifice his son.

In the last two years, more than 17,000 Muslim families, who used to live in 24 Marawi villages where the fighting was heaviest, spent Eid’l Adha in tents and shelters.

The return of the residents, scheduled in September 2019, is being plagued by a host of problems like unexploded bombs and reluctance of owners to allow the demolition of damaged structures, according to Felix Castro, TBFM field manager.

A program to verify residency had been swamped by spurious or fake documents and claims, requiring a long process of validation, Castro said.

He said as of June 28, 2019, authorities had whittled down the number of displaced families from more than 60,000 as claimed by nongovernment groups, to just more than 41,000.

More than 17,000 families of the 41,000 were from the 24 villages destroyed most by the war. The rest were from villages outside the main battle zone, Castro said.

In July, Housing Secretary Eduardo del Rosario, TFBM chair, repeated his March 2019 pledge to let Marawi residents return to their homes in the main battle zone by September 2019 by which time debris clearing would have been completed, as projected by the TFBM.

But the demolition of damaged buildings ground to a halt because of unexploded ordnance sill lying underneath the rubble.

On Aug. 3, the military safely detonated several bombs and other explosives left behind by the war.

There are 46 more bombs, however, that have not been found.

Castro said the military has not given approval to many residents to demolish their damaged structures because of the search for the bombs.

A newly activated Army engineering brigade powered by heavy equipment from China had been deployed to Marawi, raising hopes for swifter rehabilitation.

At least 224 calves had been butchered in Baloi town, Lanao del Norte and distributed to Marawi residents who sought shelter there.

Duterte’s message to Muslims was an appeal for them to offer personal sacrifice for the sake of common good.

Citing Ibrahim’s willingness to slay his son to be offered as a sacrifice, Duterte said the story taught the importance of “personal sacrifice” and the “value of submission to higher authority.”

A season of surprises: NorthPort vows to pull off stunners