DAYTON, Ohio – Mourners gathered across the country Saturday to remember the lives of a graduate student beloved by friends, a man who died in his son’s arms and a mother who shielded her infant from gunfire.

The funerals were among several being held for people who died in mass shootings last weekend in Dayton, Ohio and El Paso, Texas. Investigators in Texas said a gunman opened fire at a Walmart on Aug. 3, targeting Mexicans and killing 22 people. Less than 24 hours later, another shooter killed nine people in a popular Dayton nightlife area. 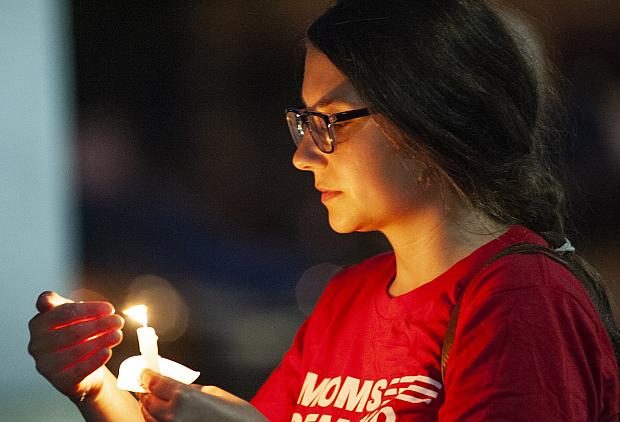 Hannah Gliemann shields her candle from the wind during an Interfaith Vigil for El Paso, Texas and Dayton, Ohio mass shooting victims hosted by the Jonesboro local group of the Arkansas Chapter of Moms Demand Action, Thursday, Aug. 8, 2019, at the Craighead County Courthouse in Jonesboro, Arkansas. The vigil featured speakers from several religious and non-religious groups, a 100-seconds of silence, and the lighting of candles to honor the victims of gun violence across the United States. (Photo by QUENTIN WINSTINE / The Jonesboro Sun via AP)

Every seat was filled and the hallways were lined with mourners in Washington, Pennsylvania, at the service for 25-year-old Nicholas Cumer. The graduate student in the master of cancer care program at Saint Francis University in Loretto, Pennsylvania, was killed in Dayton.

Elementary school teachers, high school friends, fraternity brothers and relatives were joined by scores of others as white folding chairs were set up in the parking lot to handle the overflow.

“He was just infectious. He had a heart bigger than his chest,” said Pastor Brian Greenleaf of Washington Alliance Church after officiating the service.

Greenleaf started the service by saying Cumer would probably be “smiling and laughing throughout this whole service.”

“Because the images I have of Nick are just that,” the pastor said. “Heaven is a little bit better today because of Nicholas Cumer.”

Hundreds of people, including Ohio Gov. Mike DeWine and Dayton Mayor Nan Whaley, attended Derrick Fudge’s funeral at St. John Missionary Baptist Church in Dayton, the Dayton Daily News reported. Fudge died in the arms of his son, Dion Green. He was remembered as a loving family man who painted houses and loved to fish and cook.

Green said his father spoke often of his willingness to die for him. Green previously told the Springfield News-Sun he believes his father protected him from being killed. Green said Saturday that his father, who was 57, was a great person who was always there to help when needed.

In a eulogy for her brother, Twyla Southall said Fudge lived a “simple” life, but one he loved.

“I don’t understand why my brother died in his son’s arms, but I am so grateful he was there for his father,” Southall said.

Burial services for Saeed Saleh, 38, were also held Saturday morning in Dayton, according to the Daily News. Saleh, who was originally from Eritrea and recently immigrated to the U.S., was remembered as a “humble and quiet person” by a spokesman for the family.

In El Paso, a requiem Mass was offered for 15-year-old Javier Amir Rodriguez, a high school sophomore and avid soccer player who was at the Walmart with his uncle when he was killed.

Burial was also scheduled for Jordan Anchondo, who died shielding her infant son from gunfire. Her 2-month-old son was treated for broken bones, but was orphaned after Jordan and her husband, Andre, were killed. /gsg