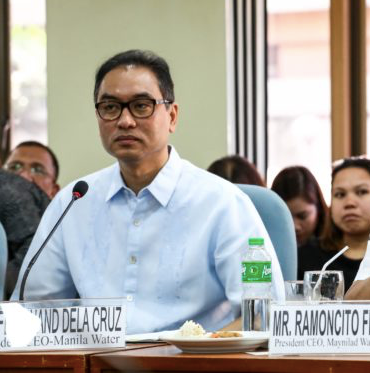 MANILA, Philippines – Manila Water Company Inc. (MWCI) President and Chief Executive Officer (CEO) Ferdinand dela Cruz is scheduled to step down on August 31, after the water concessionaire’s Board of Directors has accepted his resignation.

According to the company’s disclosure on Friday and posted at the Philippine Stock Exchange (PSE) website, Dela Cruz will be replaced by former Energy Secretary Jose Almendras, who was elected by the Board in a previous meeting.

“Please be informed that Mr. Ferdinand M. dela Cruz tendered his resignation today as Director, President, Chief Executive Officer, and Chief Sustainability Officer of the Company as well as a member of our Executive Committee effective end of business 31 August 2019,” Manila Water said.

“Our Board of Directors, at its meeting held this afternoon, accepted the resignation of Mr. dela Cruz and elected Mr. Jose Rene Gregory D. Almendras as President, Chief Executive Officer, and Chief Sustainability Officer effective 01 September 2019, as endorsed by our Nomination Committee,” the company added.

These developments were also confirmed by Manila Water Spokesperson Jeric Sevilla in a message to INQUIRER.net.

Prior to Almendras’ election, he served under the administration of former President Benigno Aquino III.  He was also the Aquino administration’s Foreign Affairs Secretary.

Dela Cruz recently made headlines for publicly apologizing for the water interruption problems that have affected Manila Water customers for days, and in some cases, weeks.

He and the Board decided to waive their minimum charge for the first 10 cubic meters of Manila Water accounts, while removing the bill for severely affected areas or those without water for seven or more days.  This was on top of the penalties imposed by the Metropolitan Waterworks and Sewerage System against the company. /jpv