Pacquiao: ‘No problem’ if I become PDP-Laban president 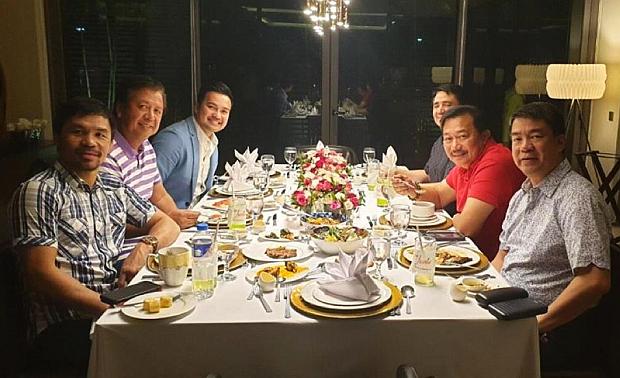 MANILA, Philippines — Sen. Manny Pacquiao on Wednesday night said he would have “no problem” with being elected as president of ruling party Partido Demokratiko Pilipino-Lakas ng Bayan (PDP-Laban) if a leadership change should happen.

“There’s no problem. That’s up to Koko [Sen. Aquilino Pimentel III]. For me, I will do what I can to help as a member of the party,” Pacquiao, speaking in Filipino, told reporters at a victory party organized for him by PDP-Laban to celebrate his win against American boxer Keith Thurman.

Pimentel, who is the party president, said that there was no assurance yet that a leadership change would indeed happen.

“We will listen to the voice of members for what they want,” Pimentel said, speaking partly in Filipino.

He explained that they should first organize their members to identify who would be the electors at the party’s national assembly.

The rumors of a change in leadership in the ruling party surfaced as several of its members transferred to the National Unity Party (NUP).

For Pacquiao, this underscores the need for a regular meeting to build the relationship among its members.

“As I told them, members should be called to attend a meeting once a month so we could talk about our direction, about developments in the party, about what our program is for the Filipino people,” he said.

He said he had suggested to Pimentel the party should push for a program to achieve peace and a better economy.

“And he liked it,” Pacquiao said in Filipino.