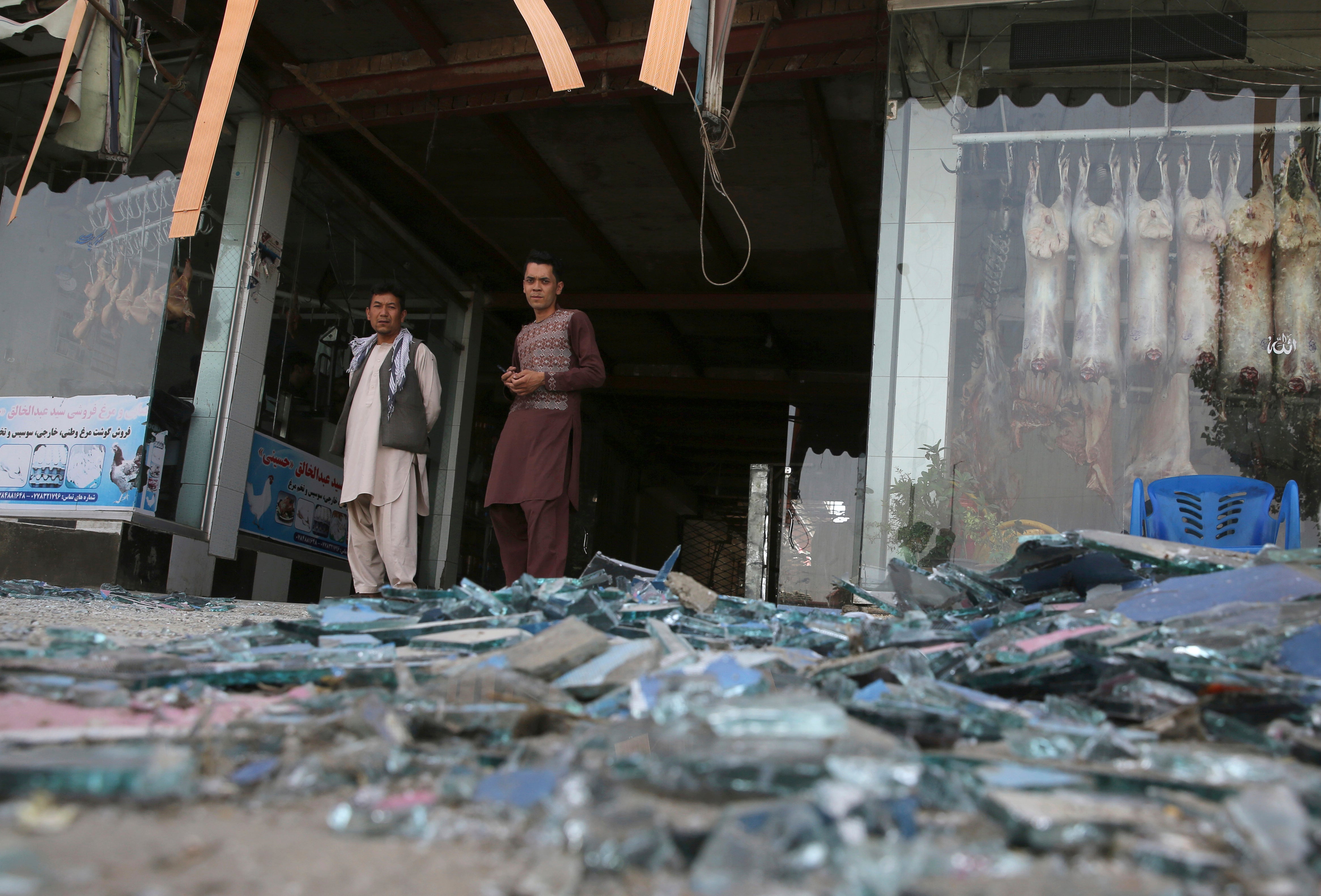 Afghans stand near a damaged shop after an explosion in Kabul, Afghanistan, Wednesday, Aug. 7, 2019. A suicide car bomber targeted the police headquarters in a minority Shiite neighborhood in western Kabul on Wednesday, setting off a huge explosion that wounded dozens of people, Afghan officials said. The Taliban claimed responsibility for the bombing. (AP Photo/Rafiq Maqbool)

KABUL, Afghanistan — A suicide car bomber targeted the police headquarters in a minority Shiite neighborhood in western Kabul on Wednesday, setting off a huge explosion that wounded dozens of people, Afghan officials said. The Taliban claimed responsibility for the bombing.

Hours after the explosion, Afghan officials would not confirm if there were any deaths in the attack, which came a day after a U.S. envoy and the Taliban reported progress in their talks on negotiating an end to the nearly 18-year war in Afghanistan.

Many Afghans worry what will happen once the estimated 20,000 U.S. and NATO troops in the country return home.

The car bomber detonated at a security checkpoint outside the police headquarters, police spokesman Firdaus Faramarz told The Associated Press. A military training school is located nearby. The Taliban said they had targeted a recruitment center for security forces.

A large plume of smoke rose above that part of Kabul, which is home to many of the minority Hazara community. The facade of one multi-story building had been ripped away. Shopkeepers were sweeping up broken glass.

The attack took place as many Kabul residents were busy preparing for the Muslim holiday Eid al-Adha, which begins on Sunday.

“I was having breakfast in a restaurant when the explosion happened,” said Mohmmad Qasem. As windows shattered, he and others rushed into the busy street.

The police headquarters has been targeted in the past, including an attack in 2017 that left more than 20 dead.

Afghanistan’s presidential election, already delayed over security and organizational concerns, is set for Sept. 28. The Taliban on Tuesday issued a threat warning Afghans to boycott the polls and avoid campaign rallies which “could become potential targets.”

The Taliban have been staging near-daily attacks against Afghan forces across the country, saying the war will continue as long as U.S. and NATO forces are still in Afghanistan. On Tuesday a bomb targeting a van carrying employees of the Interior Ministry’s counter-narcotics division killed five people and wounded seven in Kabul.

Wednesday’s attack comes against the backdrop of another round of talks this week between the Taliban and the U.S. in the Gulf Arab state of Qatar, where the insurgents maintain an office.

Zalmay Khalilzad, the U.S. envoy tasked with finding a peaceful resolution to America’s longest conflict, this week reported “excellent progress” at the Qatar talks. A Taliban official on Tuesday said differences had been resolved over the withdrawal of U.S. troops from Afghanistan and guarantees from the insurgents that they will cut ties with other extremist groups.

Khalilzad has said he is hoping for a final agreement by Sept. 1 that would allow the U.S. and NATO forces to leave the country. But the Taliban have continued to sideline the Kabul government, dismissing it as a U.S. puppet and refusing to negotiate with it.

The Taliban now control roughly half of Afghanistan and are at their strongest since 2001, when the U.S.-led invasion toppled their government after it harbored al-Qaida leader Osama bin Laden.

And in northern Baghlan province, security forces foiled an attack by insurgents, said Jawed Basharat, spokesman for the provincial police chief. He said a suicide bomber in a Humvee tried to attack an Afghan base but was killed. No security forces were killed, Basharat said.  /muf