Pulse: 9 out of 10 Filipinos want automated voting in future elections

MANILA, Philippines—A significant majority of Filipinos were satisfied with the conduct of the May 2019 elections and would want to see automated voting in future elections, a Pulse Asia survey showed Wednesday.

Among the respondents, 91 percent said they would like to see automated voting continued in future elections with only 7 percent of answering “no” to the use of automated voting in the future. 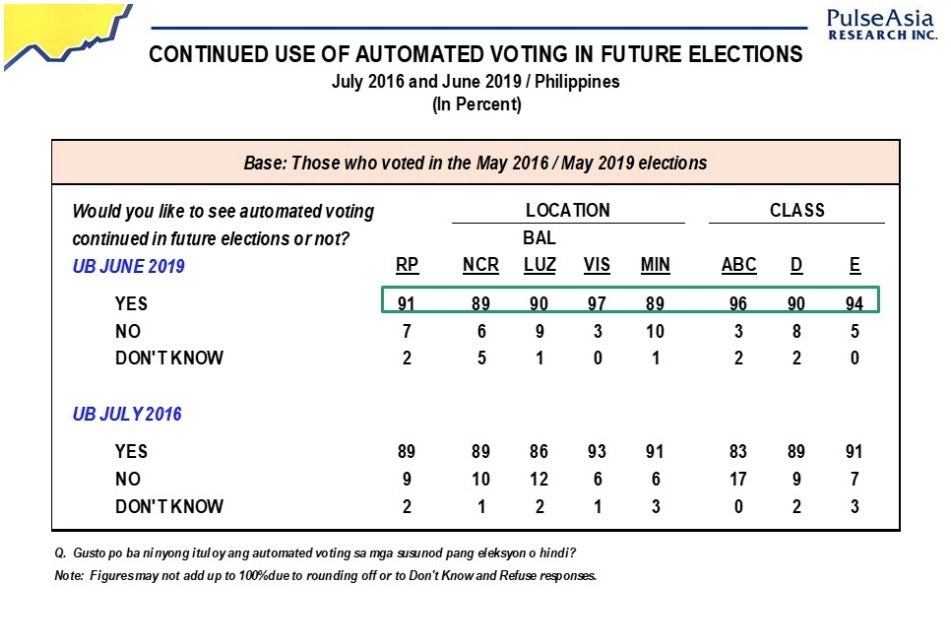 Meanwhile, 94 percent of respondents said they found the May elections orderly, 4 percent found it disorderly and 3 percent can answer on the orderliness of the polls.

The survey also revealed that 84% expressed big trust in the poll results while 94% found the vote-counting machines (VCMs) easy to use.

Of the problems encountered during the elections, most Filipinos complained about long lines.

The top reason respondents gave for not voting was their inability to go to their registered provinces to vote. This is followed by falling ill or having to go to work. These reasons account for 71 percent of the answers, while 10 percent said they could not find their names in the voters’ list and 4 percent said their registration was deactivated.

At the bottom of the list, only 1 percent didn’t trust the electoral system and another 1 percent couldn’t vote because the VCM machine broke down.

The May 13, 2019 polls have been marred with technical glitches involving the malfunctions of VCMs and SD cards. The Commission on Elections (Comelec) transparency server also suffered a seven-hour glitch hours after the elections, delaying the release of partial election results.

The survey was conducted with 1,200 respondents in the last week of June. It had sampling error margins of ±3 for national percentages, and ±6 each for Metro Manila, Balance of Luzon, Visayas, and Mindanao.

Democracy Watch Philippines stands by the results of the Pulse Asia survey, noting that “automation has proved effective in addressing a decades-old problem wholesale election cheating.”