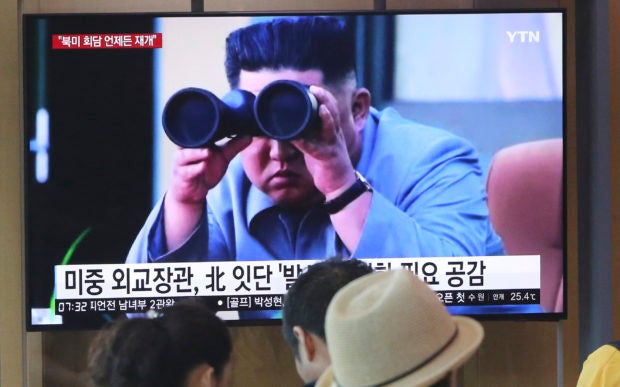 FILE – In this Aug. 2, 2019, file photo, people stand by a TV screen showing a file footage of North Korean leader Kim Jong Un during a news program at the Seoul Railway Station in Seoul, South Korea. North Korea on Tuesday, Aug. 6, continued to ramp up its weapons demonstrations by firing unidentified projectiles twice into the sea while lashing out at the United States and South Korea for continuing their joint military exercises that the North says could derail fragile nuclear diplomacy. (AP Photo/Ahn Young-joon, File)

The announcement by Pyongyang’s official Korean Central News Agency on Wednesday came a day after South Korea’s military said it detected the North firing two projectiles that were likely ballistic missiles into the sea.

Seoul’s Joint Chiefs of Staff alerted reporters to the launches minutes before the North’s Foreign Ministry denounced Washington and Seoul over the start of their joint exercises on Monday.

The ministry’s statement said the drills, which North Korea sees as an invasion rehearsal, leave the country “compelled to develop, test and deploy the powerful physical means essential for national defense.”

North Korea’s fourth round of weapons launches in less than two weeks came amid a standstill in nuclear negotiations and after President Donald Trump repeatedly dismissed the significance of the country’s recent tests despite the threat the weapons pose to allies South Korea and Japan and to U.S. bases there.

Experts say Trump’s downplaying of the North’s weapons display has allowed the country more room to advance its military capabilities as it attempts to build leverage ahead of negotiations, which could possibly resume sometime after the end of the allies’ drills later this month.

KCNA said the launches on early Tuesday verified the reliability and combat ability of the newly-developed missiles. It said two missiles launched from a western airfield flew cross-country and over the area surrounding capital Pyongyang before accurately hitting an island target off its eastern coast.

The agency reported Kim expressed satisfaction and said the launches would “send an adequate warning to the joint military drill now underway by the U.S. and south Korean authorities.”

Seoul’s Joint Chiefs of Staff said the projectiles traveled about 450 kilometers (279 miles) on an apogee of 37 kilometers (23 miles) at a maximum speed of above Mach 6.9 before landing in waters off the country’s eastern coast.

It said the projectiles showed similar flight characteristics to short-range missiles North Korea fired on July 25, which traveled about 600 kilometers (373 miles) during launches the North described a “solemn warning” to South Korea over its plans to continue military drills with the United States.

South Korea’s military had said the flight data of the July missiles showed similarities to the Russian-made Iskander, a solid-fuel, nuclear capable missile that is highly maneuverable and travels on lower trajectories compared with conventional ballistic weapons, improving its chances of evading missile defense systems. The North last week also conducted two test firings of what it described as a new rocket artillery system. /gsg