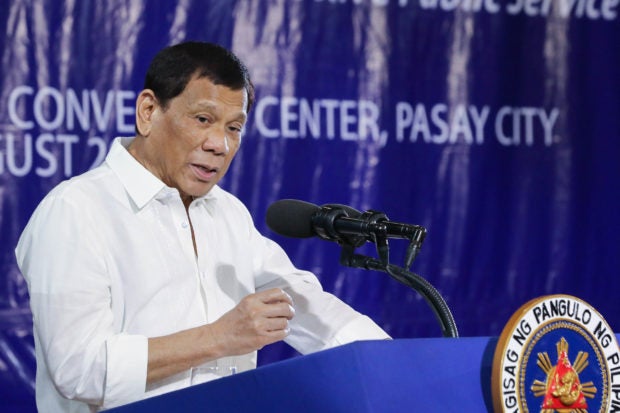 MANILA, Philippines—President Rodrigo Duterte on Tuesday said he will not declare martial law in the Negros Island in view of the spate of killings in region.

Speaking before newly-elected officers of the League of the Cities of the Philippines and Liga ng mga Barangay, the President clarified that when he said he would do something “drastic” to quell the killings in Negros Oriental and Negros Occidental, he was just referring to the deployment of more soldiers in the island.

The President claimed that declaring martial law and deploying more troops are “just the same” and will only go after lawless elements.

But if the situation in Negros escalated, Duterte warned he might declare “another thing.”

“If it is really something na gumaganun ang bayan then I might declare another thing. That is for you to guess what it would be,” Duterte said.

“Pero martial law, suspension of (the) writ of habeas corpus it’s just a proclamation, nothing. You do not go after innocent people, you do not go after law-abiding people you only go after criminals and those who sow disorder in the society,” he added.

Duterte last week said he is “about to do something drastic” amid the rampant killings in Negros. He did not elaborate on the “drastic” measure but stressed that he does not aspire to become a dictator: “Sabi ko sa inyo, wala akong ambisyon mag-diktador. On the day that I won’t step down from Malacañang, shoot me dead.”

READ: Martial law? Duterte vows to do ‘something drastic’ to address PH violence

At least 21 people have been killed in Negros Oriental from July 18 to 27, including a lawyer, a barangay captain, a city councilor, a former mayor, and a one-year-old child.

Meanwhile, Defend Negros #StoptheKillings network has recorded 83 victims of extrajudicial killings in the whole of Negros Island from January 2017 to July this year, fuelling fears for martial law declaration, which has been in effect in Mindanao since 2017. /jpv

READ: After spate of killings, city in Negros now lives in fear