Cross between lotto and ‘jueteng’ becomes the craze among gamblers in Metro Manila
By: Dexter Cabalza - Reporter / @dexcabalzaINQ
Philippine Daily Inquirer / 05:05 AM August 05, 2019 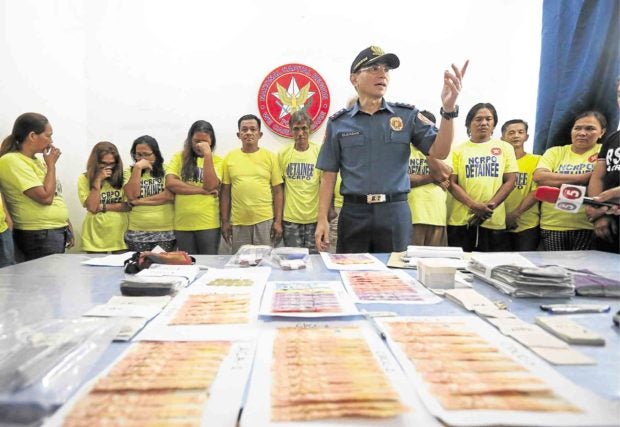 Eleven people were caught collecting bets for “lotteng” — a combination of lotto and the illegal numbers game jueteng — while one tried to stop the arrest of other bet collectors.

Esquillo was caught in Barangay Sta. Teresita in Quezon City, while Dioneda, Ulijan and Santos were collared on Concepcion Street in Barangay Santolan, Pasig City.

San Jose and Bernal, on the other hand, were arrested at T.S. Cruz Subdivision in Barangay Almanza Dos, Las Piñas City.

The rest were apprehended in different areas in Parañaque City.

“Kabo” or bet supervisor Dela Cruz and her collectors, Joselito and Amado de Pablo, were collared in a house on F. Valarao Street in Barangay Moonwalk, while Combalecer was arrested on Edison Avenue in Barangay Sun Valley.

Caught in the act

Buno was caught red-handed collecting lotteng bets on Bagumbuhay Street in Barangay Baclaran, while Flores was taken into custody for trying to stop the police from arresting some bet collectors in the area.

The suspects, who yielded over P9,000 in bets and several lotteng booklets, would be charged with violating Presidential Decree No. 1602 (as amended by Republic Act No. 9287).

“But these criminals have clever minds. They managed to get their jueteng business still running through lotteng,” Eleazar told reporters on Sunday.

The winning lotteng bets are based on the six-number combination picked during the PCSO lotto draw aired on TV.

“Small-time gamblers prefer betting on lotteng than lotto because instead of [just] six numbers, a bettor can choose up to 12 number combinations,” Eleazar said.

“The [jackpot] prize may be smaller (around P20,000) compared to the millions of [pesos in] lotto, but the chances of winning are much higher,” he added.

Read Next
Bishop David: I am a shepherd, not a politician or rebel
EDITORS' PICK
Congress urged to extend session for approval of COVID-19 response bills
Amid protests, Trump talks of war — and reelection
Cherry Mobile teams up with Cloud Panda PH, launches online store
DOH: COVID-19 mortality doubling time, transmission rate down
Leveling up your ‘lutong bahay’ with the kitchen companion you never knew you needed
Restaurant dine-in operations approved in MGCQ areas
MOST READ
Binay dares DOTr execs to commute to work during GCQ
51 percent of German firms holding back investments in PH, but not because of COVID-19
Cole Sprouse arrested while joining peaceful protest against racism
Chaos as thousands return to work in Metro Manila
Don't miss out on the latest news and information.