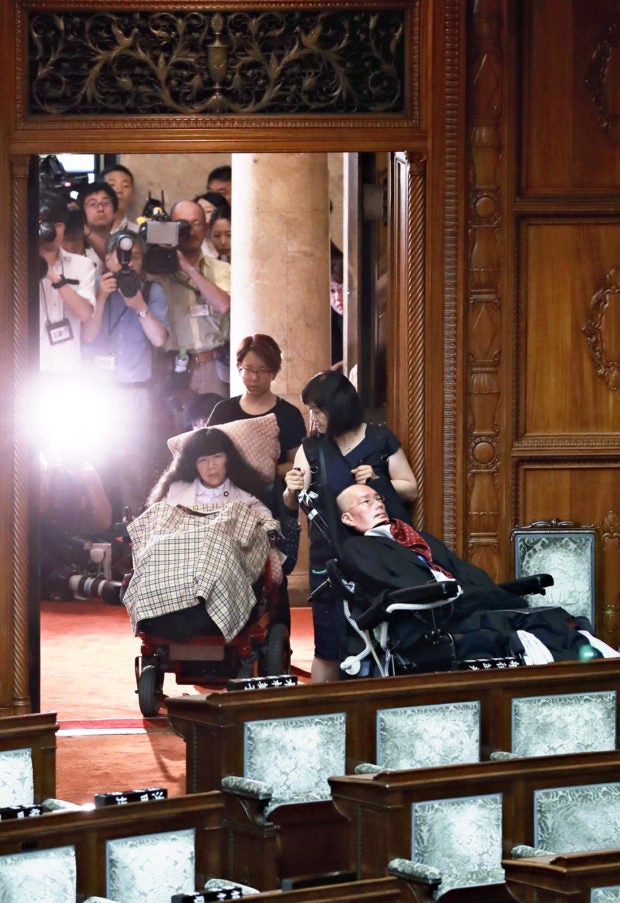 TOKYO — Two newly elected House of Councillors lawmakers with severe disabilities have shone spotlight on the plodding efforts by political assemblies across Japan to make their facilities more easily accessible.

The first attendance at the Diet by two newly elected House of Councillors lawmakers with severe disabilities has shone a spotlight on the plodding efforts by political assemblies across Japan to make their facilities more easily accessible.

Yasuhiko Funago, who has amyotrophic lateral sclerosis (ALS), and Eiko Kimura, who has paralysis from below the neck, attended the extraordinary Diet session that convened Thursday. Funago and Kimura, both of the new opposition political party Reiwa Shinsengumi, arrived by car just after 9 a.m. Caregivers pushed the lawmakers’ large wheelchairs up a slope at the Diet Building’s central entrance and then pushed the buttons that indicated they were in attendance at the upper chamber.

Several seats were removed from the Diet chamber to create space to accommodate Funago and Kimura’s wheelchairs. Before the session started, Funago communicated with his caregiver by using a character board.

In the elections to pick the upper house president and vice president, aides filled out the ballot papers for both lawmakers, and chamber officials went up to the rostrum to cast the ballots on their behalf.

At a press conference after the session, Funago said through an aide, “I sincerely felt the solemn atmosphere” of the Diet.

Making the Diet easily accessible for everyone remains a work in progress. The third floor, where Reiwa Shinsengumi has its anteroom, lacks a wheelchair-accessible toilet. Funago has asked to use an avatar robot that he can control with his eye movements. The House of Councillors Committee on Rules and Administration will consider Funago’s request.

“I think there probably are many things that need to be improved here,” Kimura said. “I’ll steadily raise these issues.”

The arrival of the two severely disabled lawmakers in the Diet also has raised questions about the efforts of local assemblies around the nation to make their facilities more accessible. A research institute’s survey revealed that fewer than 20 percent of such assemblies have taken steps that the Diet has, such as installing slopes and removing fixed seats to create room for wheelchairs.

Last fiscal year, Waseda University’s Research Institute of Manifesto, which examines topics including the progress regional assemblies have made in improving access to their facilities, surveyed all 1,788 local assemblies across the nation. Of the 1,441 assemblies that provided responses, only 256, or 17.8 percent, said their main assembly chamber had been made “barrier-free.”

Of the prefectural assemblies, 15, or 31.9 percent, said their chamber was accessible. The Tokyo metropolitan, Osaka, Kyoto and Hokkaido assemblies have not taken any measures.

This percentage dropped further for city, ward, town and village assemblies, with just 241, or 17.2 percent, saying they had removed physical barriers to accessing their chamber.

An official of the research institute said, “It seems that because of the cost of making these improvements, progress isn’t made unless there is some impetus due to, say, a disabled lawmaker being elected.”

According to a group encouraging the independence and political participation of people with disabilities, 24 incumbent local assembly lawmakers have disabilities.