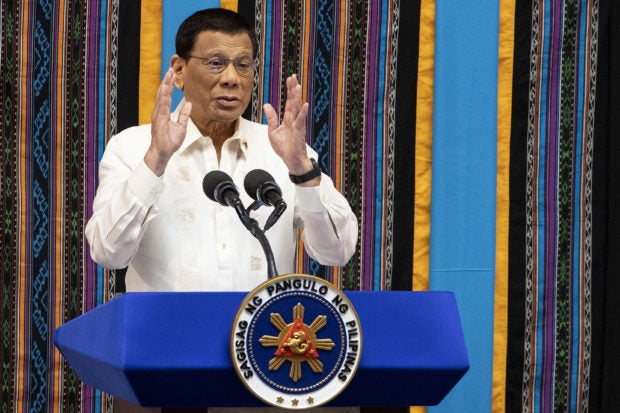 Philippine President Rodrigo Duterte gestures as he delivers his State of the Nation address at Congress on July 22, 2019.  (Photo by Noel CELIS / AFP)

MANILA, Philippines — President Rodrigo Duterte respects all criticisms against his administration – as long as they are not baseless, Malacañang said on Saturday.

“The President respects criticisms as long as the same is not baseless, unfounded or false. He even urges the people, including writers and reporters, to freely express whatever sentiments they have,” presidential spokesperson Salvador Panelo said in a statement.

Panelo was reacting to the Social Weather Stations (SWS) survey conducted in June 2019 showing that 51% of Filipinos believed it would be dangerous to print or broadcast anything against the Duterte administration.

Panelo also encouraged Filipinos “not to hesitate in articulating their thoughts on government policies, critical or otherwise.”

READ: Duterte says Gordon ‘a fart away from disaster’

According to the survey, freedom of speech was “very strong” in the Philippines.

Panelo said the survey results showed “repudiation of the vociferous and unrelenting tirade of the critics of the President, as well as the opposition, that the freedoms of speech and of expression are being curtailed by the Administration.”

“Statements of disagreement, objection or protest vis-à-vis the government are unceasing and widespread in all channels of media, including those in social media platforms reaching the global audience,” he added.