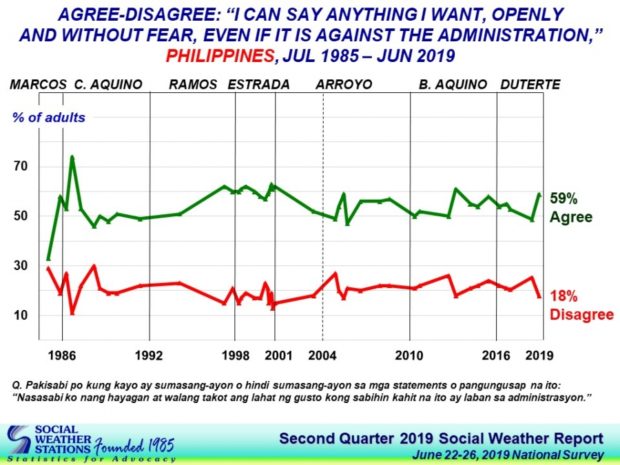 In a survey conducted from June 22 to 26, more than half, or 59 percent, of Filipinos agreed with the statement, “I can say anything I want, openly and without fear, even if it is against the administration.” Eighteen percent, however, disagreed while 23 percent were undecided about the statement.

The SWS said the survey result showed a net agreement score of +41, which is classified by very strong.

This increased by 18 points compared with +23 net agreement score, or moderate, in December 2018.

The survey also showed that 51 percent of Filipinos agreed that it is dangerous to print or broadcast anything critical of the Duterte administration while 29 percent were undecided and 20 percent disagreed.

The SWS also found that 67 percent agreed that the Philippine media have freedom of the press while 10 percent disagree and 23 percent were undecided.

This gained a net agreement of +57 which is classified as “very strong.”

Malacañang previously denied the Committee to Protect Journalists’ (CPJ) claim that there is “increasing levels of intimidation and a shrinking space for the free press in the country.”

The CPJ issued a statement expressing alarm on condition of the press in the Philippines after Rappler chief executive officer Maria Ressa faced several legal cases and the administration’s threat to withhold the franchise of TV network ABS-CBN.

The research firm used interviews of 1,200 adults aged 18 years old and above nationwide with 300 in Metro Manila, Balance of Luzon, Visayas, and Mindanao.

The survey had sampling error margins of ±3% for national percentages and ±6% each for Metro Manila, Balance of Luzon, Visayas and Mindanao. /jpv