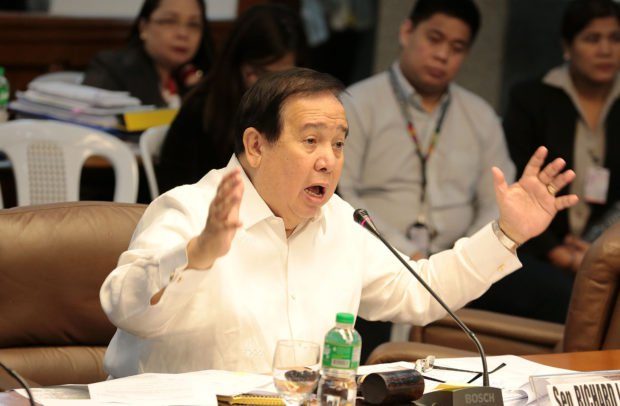 Gordon on Wednesday said that Duterte’s move to appoint former police officers and soldiers to government agencies is “dangerous.”

“It’s a dangerous one because civilian authority must remain supreme over the military. Dapat three years muna bago ka i-appoint… para mawala muna ‘yung ties mo, the ties that bind,” the senator said in a statement.

But Duterte insisted that appointing retired military officers is well within his power as Chief Executive.

“Why do you criticize me? It’s my prerogative. It’s not prohibited in the law,” he said.

“And the law says that the President…it doesn’t say except those who are ex-military men because they are not qualified,” the President added.

Duterte even asked if there’s a fireman in the crowd from Olongapo, Gordon’s bailiwick, to punch the senator for him.

Duterte has been criticized for appointing former military men to his Cabinet. But he claimed that with military men at the helm, his orders are done without questions and corruption.

The President then challenged Gordon to mention an incident when one of his military appointees disobeyed his order.

“I’m challenging him to give one specific instance na military, police, DILG members or Bureaus under it that disobeyed a single order na galing sa akin,” he said./kga