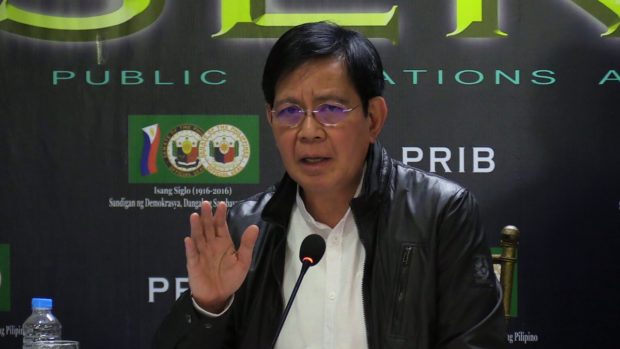 On Thursday, Aug. 1, the President launched a tirade against Sen. Richard Gordon for calling his appointment of retired military and police officials as “dangerous.”

On Saturday, Lacson, a graduate of the Philippine Military Academy and a former chief of the Philippine National Police, commented on the issue in response to a question about it in an interview over AM radio station DWIZ.

“Once retired, an officer is no longer in the military. He’s already a civilian. He’s back to civilian life. Maybe that’s the President was hurt [by the criticism],” Lacson said in Filipino.

He also pointed out that the President’s appointees would still have to undergo confirmation by the Commission on Appointments (CA).

“At the end of the day, it’s the President’s prerogative. The check and balance would come in — for example, in the case of a Cabinet secretary — through the Commission on Appointments,” he said.

“It’s his prerogative. Don’t question it… Let’s not get ahead and prejudge the appointment as wrong,” he added.

Despite being criticized for the practice, the President continued appointing retired military and police officials, saying that these appointees would follow his orders without question or corruption.

Duterte: Ex-military officers appointed because they get job done