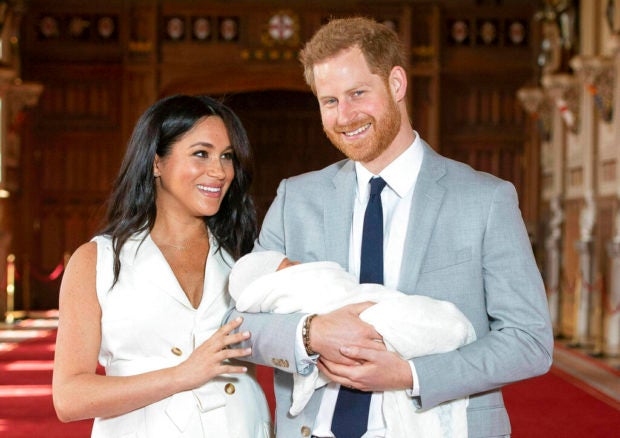 Britain’s Prince Harry and Meghan, Duchess of Sussex, during a photocall with their newborn son (Image: Dominic Lipinski/Pool via AP)

When Prince Harry sat down with world-renowned ethologist Jane Goodall for British Vogue’s September issue, inevitably the topics centered on the environment and climate change. It also raised the impact humans have on the planet—and what that would mean about having children.

The September issue titled “Forces for Change” was guest-edited by Harry’s wife, Meghan Markle, who turned down being the magazine’s cover story to highlight trailblazing women from around the world.

“We are the one species on this planet that seems to think that this place belongs to us, and only us,” the Duke of Sussex told Goodall in the interview published on Wednesday, July 31.

“It’s crazy to think we can have unlimited economic development on a planet with finite natural resources,” Goodall said.

“What we need to remind everybody is: these are things that are happening now. We are already living in it… Which is terrifying,” Harry emphasized.

Harry then discussed his love for nature, which led him to bring up taking care of it for future children. “I view [nature] differently now, without question. But I’ve always wanted to try and ensure that, even before having a child and hoping to have children…”

With a laugh, Goodall told him, “Not too many!”

“Two, maximum!” Harry reassured her. “But I’ve always thought: this place is borrowed. And, surely, being as intelligent as we all are, or as evolved as we all are supposed to be, we should be able to leave something better behind for the next generation.”

“But, in fact, we’ve stolen their future,” Goodall stressed. “But we’ve got to try and pay a little of it back. And get together to try and heal some of the harm, and at least slow down climate change.”

Harry seems to echo the concerns of some members of his generation—he is a millennial at 34—that having kids could worsen the damage to Mother Earth. Harry and his brother, Prince William, credit their father Prince Charles for instilling in them the sense of responsibility for the environment since their youth.  Niña V. Guno /ra