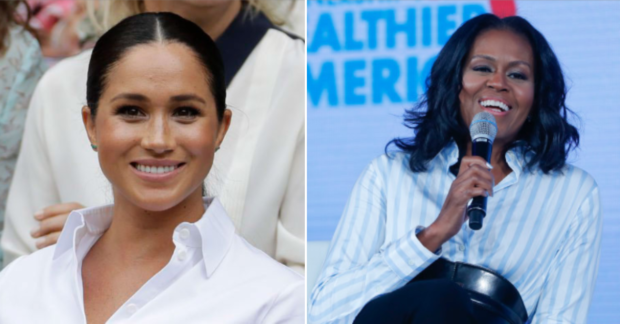 In guest-editing British Vogue’s September Issue, Meghan Markle carefully decided how to end it. She chose to go with a Q&A with former US first lady Michelle Obama.

Obama’s answers, published on British Vogue’s website on Monday, July 29, not only carry timeless life advice but also anecdotes about herself and her family. The Duchess of Sussex admitted that she herself was left “somewhat speechless” as she expected at most a two-sentence response.

Meghan’s first asked what motherhood had taught Obama, who is a mom to two daughters, Malia and Sasha. “Being a mother has been a masterclass in letting go,” the lawyer and writer said.

“As mothers, we just don’t want anything or anyone to hurt our babies… Bruised knees, bumpy roads and broken hearts are part of the deal.

“Motherhood has taught me that, most of the time, my job is to give them the space to explore and develop into the people they want to be. Not who I want them to be or who I wish I was at that age, but who they are, deep inside.”

On the advice she gives her daughters, she said, “I tell them that I hope they’ll keep trying on new experiences until they find what feels right. And what felt right yesterday might not necessarily feel right today.”

“As a younger woman, I spent too much time worrying that I wasn’t achieving enough, or I was straying too far from what I thought was the prescribed path,” she shared. “What I hope my daughters will realize a little earlier is that there is no prescribed path, that it’s OK to swerve, and that the confidence they need to recognize that will come with time.”

Meghan, who recently welcomed Archie Harrison with Prince Harry, asked if her parenting advice would be different for sons. Obama said, “It would be exactly the same. My parents, particularly my father, taught my brother and me at an early age to treat boys and girls exactly the same.”

As for the most beautiful sound she has heard, Obama said it was that of her daughters as infants. “When Malia and Sasha were newborns, Barack and I could lose hours just watching them sleep. We loved to listen to the little sounds they’d make—especially the way they cooed when they were deep into dreaming.”

She described having a baby as “magical”: “Time expands and contracts; each moment holds its own little eternity. I’m so excited for you and Harry to experience that, Meghan. Savor it all.”

During Barack Obama’s terms as President, he and his wife had friendly ties with the royal family, even prior to Meghan’s joining it. Prince William and Kate Middleton had the Obamas over for a playdate back in 2016 with their firstborn Prince George.

Harry and the former first couple support each other’s events, with the Duke of Sussex meeting with them when he travels to the US.  Niña V. Guno /ra

Read Next
Abby Binay: Makati to comply with lotto suspension but won’t revoke permits of outlets
EDITORS' PICK
PH to import 60,000 tons of fish to cover shortage
Gear up and get ready to play with Yamaha Mio Gear
Over 3 Million worth of prizes to be won at Smart Padala’s SENDali Manalo Promo!
Acer starts the year off strong with the Aspire Vero National Geographic Edition
#VotePH2022: COVID, power woes loom as poll concerns
Workers are exempted from ‘no vax, no ride’ policy – DOLE chief
MOST READ
1Sambayan names 7 aspirants in its 2022 Senate lineup
Cold-case investigation names surprise suspect in Anne Frank’s betrayal
Guevarra to Acosta: Obey rules on unvaccinated
Emma Stone calls Andrew Garfield a ‘jerk’ after he ‘lied’ about his ‘Spider-Man: No Way Home’ appearance
Don't miss out on the latest news and information.