PCSO chief focuses on keeping corruption out of games

MANILA, Philippines — It will take all day and all night to make sure that gaming operations of the Philippine Charity Sweepstakes Office (PCSO) are transparent and free of corruption, according to PCSO General Manager Royina Garma.

Speaking at a press conference on Wednesday, Garma said she had given herself two weeks to revisit and polish the processes of PCSO gaming activities.

“First of all, I don’t want to prolong it because if it takes longer whatever is illegal might return,” she said, speaking in Filipino. “And second, so many of our countrymen need jobs. So I have to consider this also. And the revenues that will come in will be used so we will have more activities.”

Earlier in the press conference, she said the PCSO lost about P250 million revenues because of the four-day suspension of its Lotto operations. 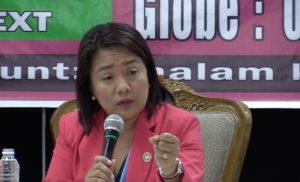 “Two weeks is certainly not enough. We won’t be sleeping then,” she added. “There’s a process to be followed. The system we will use to make it transparent will go through a process that‘s quite long. So two weeks, really, walang tulugan [no sleeping].”

Garma made this statement four days after President Rodrigo Duterte ordered the suspension of all PCSO gaming operations due to “massive corruption” within the agency.

The President lifted the suspension of Lotto operations, however, on Tuesday.

READ: Lotto back; probe of PCSO to focus on corruption

But others games — like the Small-Town Lottery (STL), Keno, and Peryahan ng Bayan (PNB) — remain suspended “pending the investigation of illegal activities and corrupt practices related thereto until the Office of the President evaluates the results of said probe,” Malacañang said.

Garma stressed that she would focus on reviewing and improving the implementing rules and regulations of all gaming operations under the PCSO and would leave it up to investigators to look into the alleged corruption within the agency.

“I will do my part in finding out how our office can improve the processes behind the games so that they will be more transparent and we can dispel the suspicion that there is corruption. That’s my main focus at the moment,” she said.

“As to who are those behind it [corruption], just let the investigators do their job,” Garma, a former police chief of Cebu City, added.

Meeting with the President

On Monday, Sen. Christopher “Bong” Go said that it was Garma who asked the President for help in eradicating corruption within the agency.

But during Wednesday’s press conference, Grama did not give a categorical answer as to whether or not there was indeed corruption.

She said that during her meeting with Duterte she expressed concern on pending court cases involving the PCSO.

“The problem is there’s a TRO [temporary restraining order]. So the court is involved,” she said. “Then the STL [Small Town Lotter] is also in a situation has to be addressed. So it’s not only the PCSO that can do that. We need the help of the Office of the President. We cannot do this alone without his [the President’s] help or intervention.”

Following the allegation of “massive corruption” in the PCSO, Supreme Court Chief Justice Lucas Bersamin gave all trial courts until Aug. 5 to report the status of cases involving the agency.

The courts were also required to report whether they had issued TROs and writs of preliminary injunction in those cases.

In February, PCSO Chair Anselmo Pinili also complained to the Office of the Court Administrator about a court order in favor of an STL operator whose franchise had been canceled for not remitting the share of PCSO.

On Tuesday, presidential spokesperson Salvador Panelo gave an assurance that investigation into alleged PCSO irregularities would be swift. He said that the President worked fast and would want to get to the bottom of a “grand conspiracy” in the PCSO, which was what prompted him to order the suspension of all its gaming operations.

READ: Duterte probe of corruption in PCSO to be swift – Palace

“We’re closely looking into it to see if maybe there’s a failure in the collection,” Garma said. “Perhaps there are some glitches in the implementation of the IRR [implementing rules and regulations]. Or perhaps there’s something wrong that they [the perpetrators] might like to get away with.”