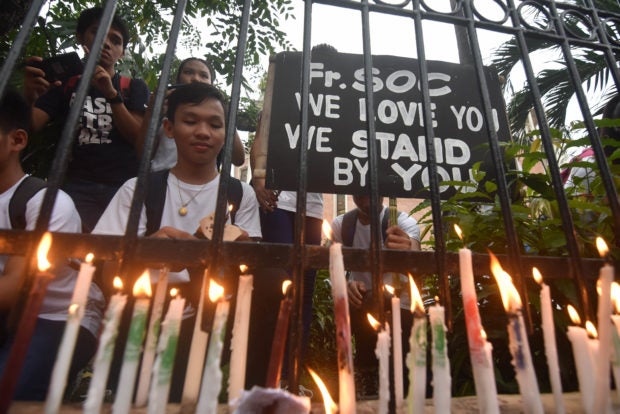 Church workers, parishioners, and students hold a procession in Dagupan City in support of Lingayen-Dagupan Archbishop Socrates Villegas, who was among the respondents in the PNP-CIDG’s sedition complaint filed at the Department of Justice. INQUIRER/Willie Lomibao

DAGUPAN CITY — About 1,000 people here on Wednesday rallied behind Lingayen-Dagupan Archbishop Socrates Villegas, who was accused of sedition in connection with the “Ang Totoong Narcolist” videos.

Church workers, students, and parishioners carried placards with messages expressing support for Villegas and gathered for a procession around the city at about 5 p.m.

Villegas’ supporters called on the Philippine National Police-Criminal Investigation Group (PNP-CIDG) to drop the sedition charges it filed against the bishop and three other Catholic bishops as well as Vice President Leni Robredo and other key personalities in the opposition.

They also lit candles in front of the St. John the Evangelist church where they celebrated the Eucharist.

The PNP-CIDG filed a sedition complaint against critics of President Rodrigo Duterte and his administration in relation to the viral “narco videos” that linked Duterte’s family members and allies to the illegal drugs trade. /kga