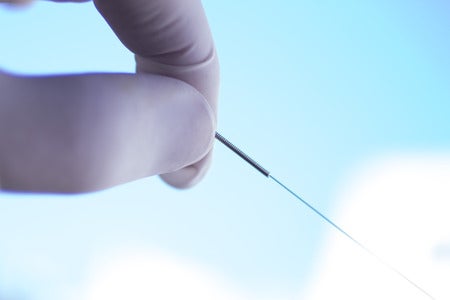 A boy claimed that he inserted a needle into his penis to keep himself awake while doing homework.  Image: INQUIRER.net Stock Photo

A schoolboy in China had to undergo emergency surgery after inserting a needle into his penis. The boy reportedly told his mom that he poked it through his genitals to stay awake while doing homework.

The child, which reports say is 12 or 13 years old, was rushed to the Xi’an Children’s Hospital in central China after confessing the act to his mom, Global Times reported on Sunday, July 28. The acupuncture needle belonged to the boy’s grandmother and was taken from her drawer.

The boy only owned up to it after his mother noticed that he was walking slowly and that he would not speed up even after she told him to. He claimed, “I kept falling asleep while doing homework, so I tried to wake myself up by putting a needle up my urethra.”

It was already 15 hours after the incident that he was taken to the hospital. Tests showed a 10-centimeter needle inside his urethra, near his bladder. Because of this, the boy felt pain while walking or urinating.

The doctor said that if the needle moved, the boy’s bladder or arteries could have ruptured. There was also a risk of bleeding or infection.

After a two-hour surgery, the needle was finally removed. Hopefully, after the ordeal, the student finds less painful ways to perk himself up.  Niña V. Guno /ra