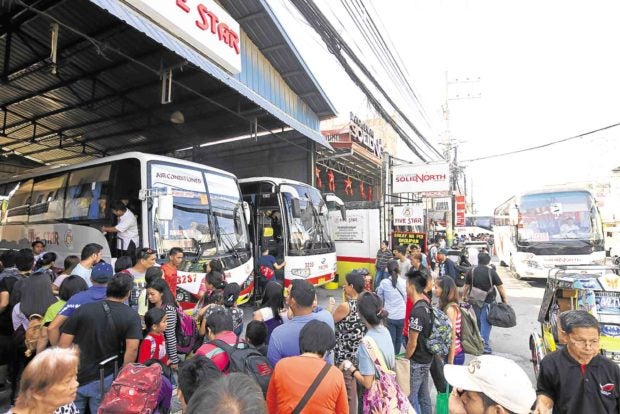 MANILA-BOUND Passengers bound for Metro Manila wait for their turn to board buses at a terminal in Dagupan City, Pangasinan province. —WILLIE LOMIBAO

Officials of a major provincial bus line servicing provinces in northern and Central Luzon said there was no guarantee that the removal of provincial bus terminals on Edsa would ease traffic congestion in Metro Manila.

Pocholo Galian, Victory Liner Inc. (VLI) area manager in Olongapo City, said provincial commuters would have a harder time getting off at the Valenzuela City common terminal, which has been designated by the Metropolitan Manila Development Authority (MMDA), to catch a taxi or a city bus to reach their final destinations in the capital.

VLI is one of the country’s largest transport firms, with a fleet of 917 buses that ply the provinces of Zambales, Pangasinan, Bulacan, Pampanga and Bataan, Baguio City and Cagayan Valley region.

“The main reason for traffic is private cars. There should be more drastic measures imposed on private cars instead of banning provincial buses,” Galian said in a statement.

Raul Ecaldre, the company’s customer care relations officer, said the ban would inconvenience passengers. “We have advance bookings and we may have to cancel them and refund the customers,” he said.

He said the company was still waiting for the final decision of the MMDA and the Land Transportation Franchising and Regulatory Board on the implementation of the ban.

The MMDA general manager, Jojo Garcia, on Monday said the MMDA was considering either Aug. 6 or Aug. 7 to start the provincial bus ban.

Adel Briones, who commutes daily from Pampanga to Metro Manila, said the MMDA policy “goes against all common sense and logic.”

“They [MMDA] will ram it down the commuters’ throats as if it will solve the traffic problem,” Briones said in a Facebook post.

He added: “What’s the interest behind this very strong stance of the MMDA? Who are the backers? Who will ultimately benefit? Because even a 4-year-old child can understand there’s something very, very wrong with this policy.”—Reports from Joanna Rose Aglibot, Yolanda Sotelo and Tonette Orejas