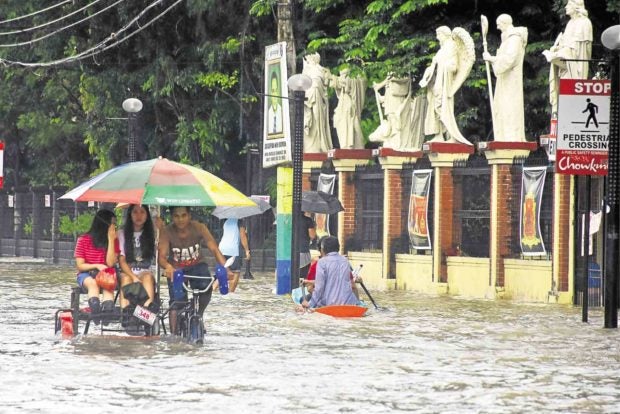 WATERWAY Residents of Dagupan City take boats or pedicabs as floodwaters rise at the city center in this photo taken in July 2018. This year, officials in Pangasinan have ordered the clearing and dredging of canals, drains and waterways to ease flooding as the province prepares for the typhoon season. —WILLIE LOMIBAO

LINGAYEN, Pangasinan, Philippines — This capital town began dredging its drains while Dagupan City drew up plans to install more floodgates during high tide in preparation for the monsoon rains.

Volunteers cleared drainage canals along downtown Lingayen and around the plaza that had not been cleaned for almost three decades.

The town drains have a depth of 0.91 meters (3 feet), which could take in heavy rainfall, but muck and plastic litter have obstructed runoff water.

“We have a good canal system, all emptying into the Basing River. But the drains are clogged and we need to clean them to stop flash floods,” said Mayor Leopoldo Bataoil, recalling the floods in the plaza after an hourlong rain in May.

The plaza again suffered flash floods when Tropical Storm “Falcon” (international name: Danas) struck the province last week. The water quickly subsided, “but not as fast as we wanted it to,” Bataoil said.

“Dredging is still a work in progress because other canals around the central business district have not been cleaned,” said Bataoil, a former representative of Pangasinan’s second district.

Members of the local group Grace Guardians have been digging up sludge from canals, with the aid of a backhoe, but the town government has requested additional equipment from the Department of Public Works and Highways.

In Dagupan, city engineer Virginia Rosario proposed a 30-day work plan that includes the installation of temporary floodgates that would be closed during high tide. Teams were also deployed to clean the city’s creeks and drains.

Mayor Brian Lim earlier said a comprehensive drainage audit would be conducted as an initial step for planning long-term solutions for the city’s perennial flooding.

Dagupan has an average elevation of 1 meter above sea level and has 14 creeks and seven rivers that flow out into the Lingayen Gulf.

In Calabarzon region, residents along rivers and flood-prone areas in the provinces of Cavite, Laguna, Batangas, Rizal and Quezon were advised to take caution amid the inclement weather caused by the southwest monsoon.

The region has been experiencing light to moderate rains over the last few days.

According to the weather bureau, waterways likely to be affected were the Pagsanjan, Pila-Santa Cruz, San Juan and San Cristobal rivers in Laguna.

It also warned communities near Loboc, Cañas, Ylang-Ylang and Imus rivers in Cavite, as well as those along the Lian, Banabang-Molino, Pansipit, Kapumpong, Rosario-Lobo and Upper Bolbok rivers in Batangas.

In a telephone interview on Tuesday, Alex Masiglat, information officer of the Regional Disaster Risk Reduction and Management Council, said they had yet to enforce preemptive evacuation but had been monitoring water levels in the tributaries identified by Pagasa. —Reports from Yolando Sotelo and Maricar Cinco