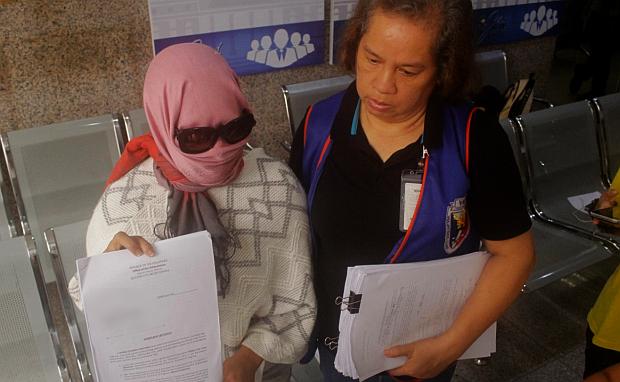 Cristina (not her real name) files a complaint at the Office of the Ombudsman against Cavinti Mayor Milbert Oliveros whom she accused of having infected her with chlamydia, a sexually transmitted disease. (Photo by GABRIEL PABICO LALU / INQUIRER.net)

MANILA, Philippines – A woman will file a criminal complaint against Mayor Milbert Oliveros of Cavinti town in Laguna for allegedly infecting her with chlamydia, a sexually transmitted disease (STD).

The woman — who identified herself as Cristina, though it’s not her real name —brought her affidavit to the Office of the Ombudsman on Tuesday, but it was reportedly rejected because she still lacked some requirements.

In the affidavit, Cristina said Oliveros was liable for violating certain sections of the Anti-Violence Against Women and Their Children Act of 2004 and the Civil Service Code.

Cristina was assisted by members of the Volunteers Against Crime and Corruption (VACC) and a certain Michael Eric Castillo.

According to her, she learned of her condition, supposedly diagnosed as chlamydia, during a prenatal check-up.

“When I got pregnant, I went to the OB-Gyne in the first week ng April,” she told reporters, speaking partly in Filipino. “As you know, the doctor would normally let you undergo a series of laboratory tests to prepare you for your pregnancy.”

“I have had long been doubtful. I kept asking him about his [medical] history. But he did not admit to anything. But in the laboratory tests it appeared that he had something,” she added.

According to Cristina, Oliveros knew her condition but chose to leave her alone to face all her problems. She also claimed that Oliveros was her only partner before contracting the disease, having lived with the local executive for around five months.

“He left me hanging. After deceiving me, hurting me, and making a fool out of me, he just left me without warning,” she said, still speaking in Filipino.

“I’m a woman. I know who my partners were, whatever they might say. They could get in touch with my OB,” she added.

INQUIRER.net tried to reach Oliveros for his reaction, but he was unavailable as of this writing.

However, Cavinti City Administrator Rick Jayson Tatlonghari said in a telephone interview that the mayor’s instruction was to wait for the copy of the complaint before officially commenting on the issue.

Tatlonghari insisted that this complaint was merely a rehash of old issues thrown against the local official.

“This alias Cristina — in fact, she was the one courting the mayor before,” Tatlonghari said in Filipino. “A previous complaint like this was dismissed by the Ombudsman.”

He also believed that politics played a part in the complaints. He noted that Michael Eric Castillo, who accompanied Cristina when she filed her complaint at the Office of the Ombudsman, was a former ally of Oliveros.

Tatlonghari said this was Castillo’s way of getting back at Oliveros, who had allegedly sued Castillo for usurpation of authority and non-submission of the latter’s Statement of Assets, Liabilities, and Net Worth (SALN).

“That’s political vendetta,” Tatlonghari said. “He used to be an ally of the mayor. He’s a former councilor. Several cases were filed against him — including voyeurism over his spreading an alleged sex video of the mayor, usurpation of authority, and non-submission of his SALN.”

Oliveros was embroiled in a sex-tape scandal in 2016, at the height of the campaign period of the local elections.

He recently edged fellow candidate Enteng dela Torre in the mayoralty race in the 2019 midterm elections by just 3,859 votes.