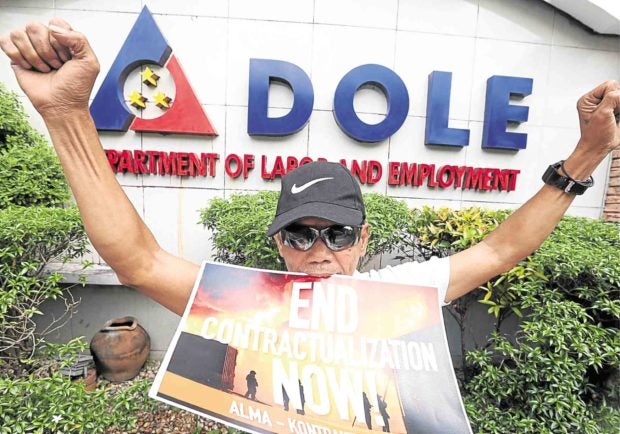 URGENT CALL A worker calls for an immediate end to labor contractualization during a protest rally in front of the Department of Labor and Employment building in Intramuros, Manila. —MARIANNE BERMUDEZ

MANILA, Philippines — President Rodrigo Duterte has instructed the Department of Labor and Employment (DOLE) to revisit his vetoed Security of Tenure (SOT) bill and craft a clearer version of the measure.

Speaking at a press conference on Monday, Labor Secretary Silvestre Bello III said the DOLE was directed to come up with a new formulation of the proposed law.

“[We were instructed] to revisit the entire provision and come up with a clearer and more focused provision to provide security of tenure to our workers,” Bello said.

“We hope to have a new version or formulation before Monday so that it can be presented to the Ledac (Legislative-Executive Development Advisory Council),” he added.

The labor chief had a meeting with President Rodrigo Duterte shortly after Presidential Spokesperson Salvador Panelo confirmed that the President had vetoed the SOT bill.

In his veto message, the President expressed his commitment to protect the rights of workers.

“Our goal, however, has always been to target the abuse while leaving businesses free to engage in those practices beneficial to both management and the workforce,” he said.

He also stressed that “while labor-only contracting must be prohibited, legitimate job-contracting should be allowed” provided that the contractor is “well capitalized, has sufficient investments, and affords its employees all the benefits.”

Duterte said “businesses should be allowed to determine whether they should outsource certain activities or not.”

However, Bello said that determining whether or not an employer would be allowed to outsource a certain service would be up to a tripartite body consisting of representatives from the labor sector, the management of an employer, and DOLE.

“Under that bill, you cannot outsource a service if it is directly related to the principal business of the employer. Ngayon, as to whether the service is directly connected or not is subject to a determination by a tripartite body,” the labor secretary explained.

“Kaya the same because we wanted to find out from the President’s men or the officials na nag-influence sa Pangulo na-i-veto ito, para i-pinpoint nila kung ano ‘yong may problema sila,” Villanueva told reporters after filing the bill.

According to Bello, the President’s focus was on the bill’s definition of labor-only contracting.

He further said that versions of the bill filed at both chambers of Congress would be considered in DOLE’s crafting of a new version.

“It will be a version that will be crafted by our team together with the team of some senators—kasi kinukuha rin namin yung mga version ng ibang senators and saka sa Congress—we will get all of their inputs from their own version and on the basis of this, we’ll come up with a version that we think will serve the purpose of the workers and the businessmen,” Bello said.

According to DOLE Assistant Secretary Benjo Benavidez, one thing they would be looking at is the extent of the prerogative of an employer’s management in determining which services could be outsourced.

The labor chief, meanwhile, expressed confidence that the new version of the SOT bill would not suffer the same fate as the vetoed one.

“The mere fact that he (Duterte) allowed us to review this bill…malaking bagay ‘yan. It’s a step forward,” Bello said.

“What is important is that he is open to a new version,” he added./ac

Read Next
Guevarra orders NBI to probe alleged PCSO corruption
EDITORS' PICK
Manila is 78th most expensive city in the world for foreign workers
TeaM Energy pushes development programs to help in pandemic rebound
Want to help local farmers? Shop small and eat Real Food
Piolo Pascual: The Ultimate Heartthrob continues to level up
ICC is everything but a court of ‘white people’
Garcia softens stance, meets IATF halfway on swab-upon-arrival policy
MOST READ
Sharon Cuneta on living in the US: ‘Nagagawa ko lahat ng normal na bagay’
ICC is everything but a court of ‘white people’
Duterte-Duterte tandem possible but ‘winnability is another question’ — Binay
More than 150,000 voters wiped off the registration list – Comelec
Don't miss out on the latest news and information.