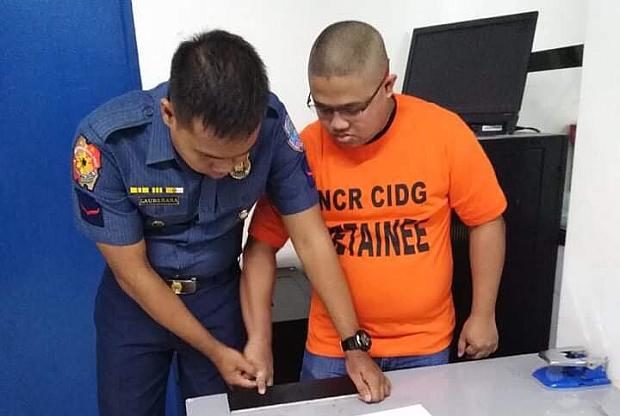 Peter Joemel Advincula, alias Bikoy, gets fingerprinted at the PNP-CIDG in Camp Crame on Monday, July 29, 2019, after turning himself in for his cyberlibel case in connection with the “Ang Totoong Narcolist” series of videos. (Photo from CIDG-NCRFU)

MANILA, Philippines — Peter Joemel Advincula, who surfaced and identified himself as “Bikoy” – the narrator in the controversial “Ang Totoong Narcolist” videos — surrendered to the Criminal Investigation and Detection Group (CIDG) of the Philippine National Police (PNP) at Camp Crame in Quezon City on Monday night.

PNP chief Gen. Oscar Albayalde confirmed this to INQUIRER.net, saying a warrant of arrest for cyberlibel against Advincula dated July 11 was released by the Legazpi City Regional Trial Court Branch 5.

The court recommended a bail worth P10,000 for Advincula’s temporary freedom.

According to Maj. Gen. Amador Corpus, CIDG director, and Lt. Col. Arnold Thomas Ibay, CIDG-NCRFU director, Advincula was accompanied by his family when he surrendered to police at around 7 p.m.

As of this writing, police have not confirmed who had filed the cyberlibel case, although records show Bicolano businessman Elizaldy “Zaldy” Co filed on May 14 before the Legazpi City Prosecutor’s Office two cyberlibel complaints against Advincula, along with Rodel Jayme who owns MetroBalita.net, the website that circulated the videos; social media giant Facebook, and search engine Google.

In the fifth episode of the “Ang Totoong Narcolist” series, Advincula said that a drug syndicate called Quadrangle Group had been operating in Bicol and was being led by Co.

He also alleged that a basement inside the Misibis Resort and Hotel Management Inc., which Co owns, was being used as a drug laboratory.

Advincula’s cyberlibel case adds to a number of other criminal cases he is facing, including sedition raps filed by the CIDG before the Department of Justice (DOJ) for his involvement in the “Ang Totoong Narcolist” videos, which implicated family and friends of President Rodrigo Duterte to an illegal drug syndicate.

Advincula, whose affidavit was the basis of the sedition case, is expected to apply for inclusion in the witness protection program.

The sedition case accuses Vice President Leni Robredo and other personalities of involvement in the video series, which were supposedly released to create noise during the May midterm elections and to unseat the President.