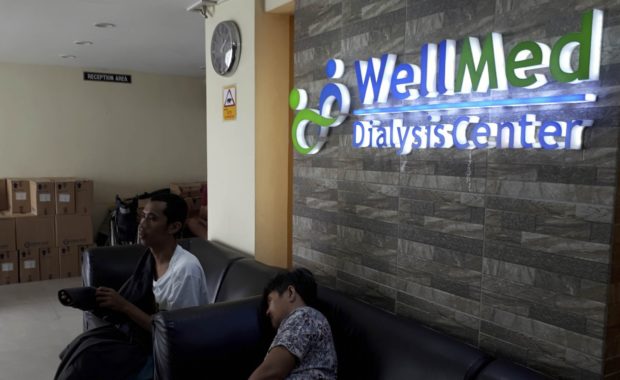 VEHEMENT DENIAL Lawyers for WellMed Dialysis Center say their client “vehemently denies” allegations by its two former
employees that the clinic had been collecting payments for the dialysis of patients who have long died or have discontinued the
treatment using funds from the state-run Philippine Health Insurance Corp. —INQUIRER PHOTO

MANILA, Philippines — The dialysis center that was uncovered to have allegedly managed to file “ghost” treatment claims and collect money from the Philippine Health Insurance Corp. (PhilHealth) has continued to get reimbursements from the government.

This was according to Senator Panfilo Lacson, who revealed in a privilege speech Monday that WellMed Dialysis Center still received repayments from PhilHealth up to June this year despite a previous exposé on its purported irregular practice.

Lacson, citing data from PhilHealth, said WellMed obtained reimbursements from government amounting to more than P4.24 million from January to June, with the dialysis center getting repaid with P1.22 million in June alone.

The senator also noted that WellMed was paid “in record speed” with turnaround time as short as two days although fraud allegations against it have already been made public.

A Philippine Daily Inquirer report had previously exposed that WellMed filed claims with PhilHealth over dialysis treatments for patients who are already dead or have long stopped the treatment. /kga

Read Next
NDRRMC, other gov’t agencies urged to hasten assistance to quake-hit areas in Batanes
EDITORS' PICK
Smart offers wireless fiber-like speeds to Filipino homes with country’s first 5G Prepaid Home WiFi
Pharmally’s Twinkle Dargani in tears when asked about missing documents
Corruption in PH: Where presidential aspirants stand
Two more sites at Robinsons Malls for temporary offsite passport services
BIR audits tax compliance of Pharmally
Holidays made best with Acer’s ‘Holidays at Home’ raffle promo
MOST READ
Roque ‘hurt’ after presidential aspirant did not adopt him in Senate lineup
Gordon: ‘How dare you ask for Filipinos’ vote when you failed them?’
Pharmally’s Twinkle Dargani in tears when asked about missing documents
WHO chief scientist say Omicron is very transmissible
Don't miss out on the latest news and information.