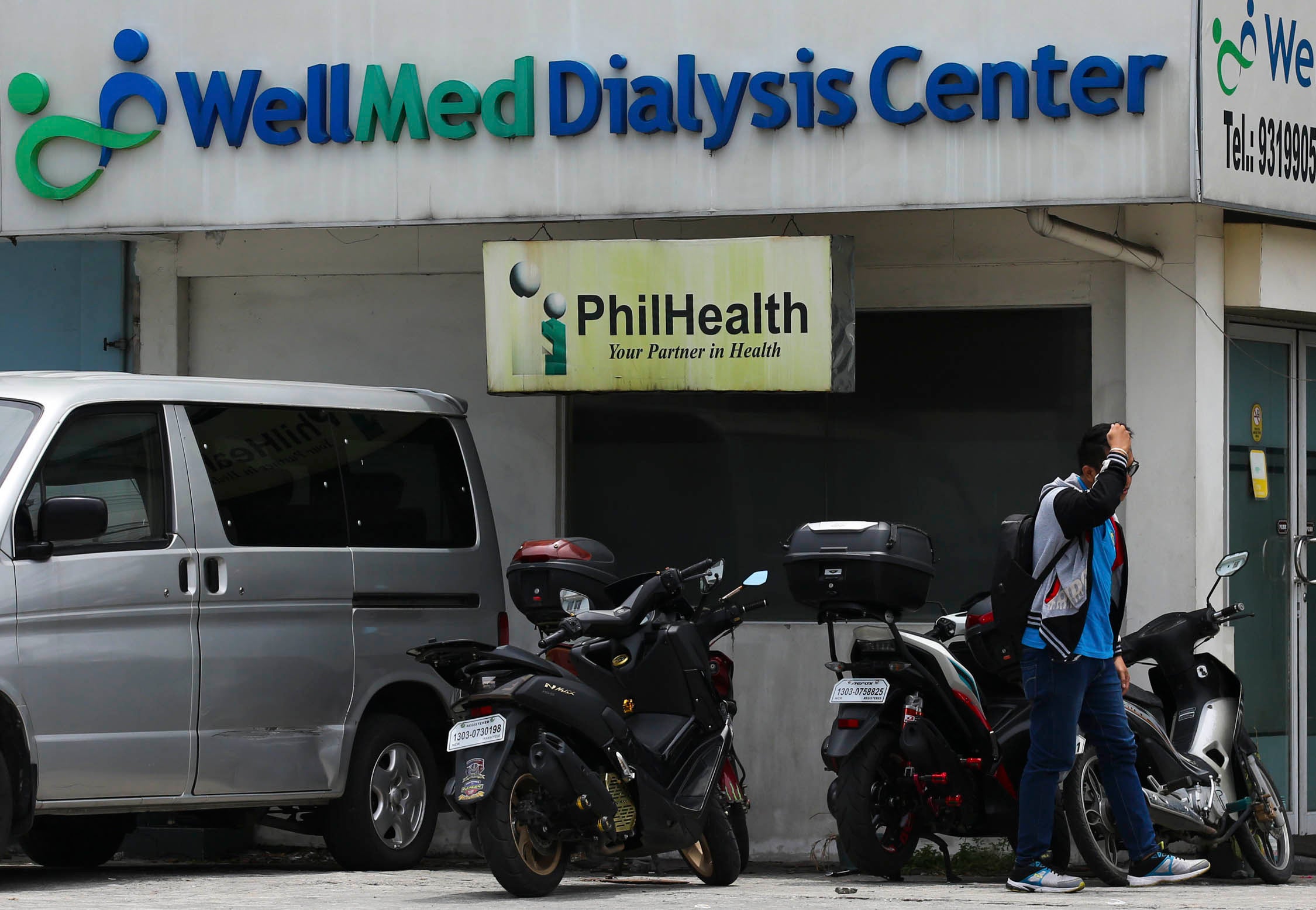 BOGUS CLAIMS A former employee of WellMed Dialysis & Laboratory Center Corp. in Novaliches,Quezon City, accuses his
former employer of filing PhilHealth claims for dialysis sessions on behalf of a patient who had already died and said that PhilHealth
continues to pay without verifying the claims. —LYN RILLON

MANILA, Philippines — As a member of Philippine Health Insurance Corp. (PhilHealth), patient “Maria” was getting free dialysis treatments at a Quezon City center.

Each PhilHealth member is entitled to 90 free dialysis sessions a year. But after Maria died in March 2016, PhilHealth continued paying for the rest of the dialysis treatments that were due her for the year at P2,600 each.

This is because WellMed Dialysis & Laboratory Center Corp. (WellMed) on Quirino Highway in Barangay Gulod, Novaliches, Quezon City, continued filing claims for the sessions on her behalf despite her death, according to Edwin Roberto, a former employee of the center.

And PhilHealth continued paying, apparently not checking if the claims were valid, Roberto told the Inquirer.

“It’s ghost dialysis,” he said of one of the schemes that WellMed had supposedly carried out to bilk the government.

Lawyer Harry Roque, whom Roberto and his fellow ex-employee Liezel Santos had approached for help, said he was interested in their case because he wanted irregularities in PhilHealth fixed soon, especially with the implementation of the Universal Health Care (UHC) Act.

Roque sponsored the measure in the House during his term as representative of the Kabayan party list group.

The implementing rules and regulations of the UHC law are now being crafted. “I don’t want the UHC to be used to fatten the pigs in government,” Roque said.

In a sworn statement, Roberto said he decided to expose “the illegal activities of my former employer that are not in accordance with the policies” of PhilHealth, the Bureau of Internal Revenue, and the Department of Health because “I was bothered by my conscience.”

Roque, who once served as President Duterte’s spokesperson, said Roberto’s sworn statement would be used for a case buildup.

Roberto and Santos said they reported the irregularity to PhilHealth last year and provided the names of the members whose benefits had been used.

They lamented the slow pace of PhilHealth’s inquiry into the matter, and said they were afraid that harm might come to them because of their disclosures.

They said their savings had been depleted but they were also finding it hard to seek work because of harassment from their former employer.

They expressed hope that President Rodrigo Duterte would take action on the matter.

The Inquirer e-mailed WellMed to ask for an interview, but one of its owners, ophthalmologist Bryan Christopher Sy, declined the request.

“I respectfully decline your request for an interview. Thank you for your consideration,’’  Sy said in reply to the Inquirer’s e-mail.

Roberto worked as assistant manager at WellMed and performed various duties, including facilitating the processing of claim forms. Santos served as a PhilHealth officer.

In his affidavit, Roberto said the filing of questionable claims began in March 2016 upon the instruction of one of WellMed’s owners, who directed them to seek payment for deceased patients’ nonexistent dialysis treatments.

The owners prepared the claims and told the center’s employees to copy the patients’ signatures from their medical records so that these claims could be submitted to PhilHealth, he said.

Roberto said he would check the PhilHealth portal to determine if a patient was still eligible for dialysis sessions. If so, he would print out a PhilHealth benefit eligibility form, attach a claim form and a copy of either a PhilHealth payment receipt or a certificate of contribution, and then submit the papers for payment.

But the scheme was not limited to deceased patients, Roberto said.

He said WellMed also filed PhilHealth claims for dialysis treatments using the names of living patients who had not used up their 90 sessions for the year. For instance, if a patient had two sessions in a week, WellMed would file claims for three sessions, he said.

“They know PhilHealth would pay for [the claims], which is why they use or charge for all of the sessions, since PhilHealth will not find them out,” Roberto said.

If a PhilHealth member is unable to use the entire 90 sessions of dialysis for the year, the remainder would just be forfeited, he said.

No way of knowing

According to Santos, the patients in these instances do not find out that the center had filed payments for ghost dialysis sessions on their behalf because PhilHealth does not send out benefit payment notices.

“They won’t see the dialysis charges unless [they request] a journal, but usually they’re not interested in doing this,” she said.

For most patients, what is important is that they’re not made to pay for the dialysis sessions, Roberto said.

Another way that the PhilHealth dialysis package is abused is when this is used to pay for other treatments at WellMed, Roberto said in his sworn statement. A patient who has to undergo an injection of erythropoietin, for instance, would merely be made to appear to have undergone dialysis, and WellMed would then claim payment for the session.

PhilHealth payments came in the form of checks made out to the center, Roberto said.

Roberto and Santos reported the scheme to the PhilHealth action center in July 2018. They were referred to Board Member Roberto Salvador, who, they said, assured them that they would not be included in any cases and that they would be given protection.

They also submitted documentary evidence to Ernesto Barbado Jr., the senior manager of PhilHealth’s Fact Finding Investigation and Enforcement Department. But they were told that PhilHealth could not directly give them protection and benefits as its policy on whistleblowers applied only to its employees.

Roberto and Santos said they could not keep quiet about what they knew. They have received threats from one of the owners, and they have reported this to the police, Roberto said.

They also fear that WellMed would try to turn the tables on them, he said.

“We are taking a stand because we believe this is an eye-opener for the leadership of the agency, which would let them put an end to the theft of the funds of the members,” he said, adding:

“We believe that if the PhilHealth funds are taken advantage of, everybody would lose because of the actions of some corrupt hospitals.”

In January, Roberto and Santos followed up with PhilHealth on their complaint against the dialysis center and were told that it remained pending. But WellMed’s accreditation has been renewed, Roberto noted.

He said he and Santos had also informed PhilHealth of WellMed’s efforts to harass them by threatening to file cases against them.

He expressed his and Santos’ disappointment at the statement of Barbado’s office that PhilHealth would not be a part of the matter and that it was not concerned with what would happen to them.

“We find the pace of the investigation too slow and we are concerned for our safety,” he said.

Roberto and Santos also reported the matter to the government’s complaint hotline, 8888, in April.

But the person they talked with advised them to bring the matter to a politician for faster action, Roberto recalled. The person said the hotline would just refer the matter to the agency concerned for investigation.

A lawyer from the Public Attorney’s Office told them the same thing, he said.

Through referrals, Roberto and Santos were eventually able to get in touch with lawyer Roque.

Roberto also said he decided to report what he knew because he was concerned that PhilHealth would be paying for more bogus claims in the coming months, given that the dialysis industry was booming.

Filing claims is also easier now because most of the transactions are done online, he pointed out, adding that with the implementation of the UHC law, the number of covered dialysis sessions could be increased.

And this may mean more opportunities to file claims for “ghost dialysis” treatments, he said.