‘Even with PhilHealth coverage, free dialysis not enough’ 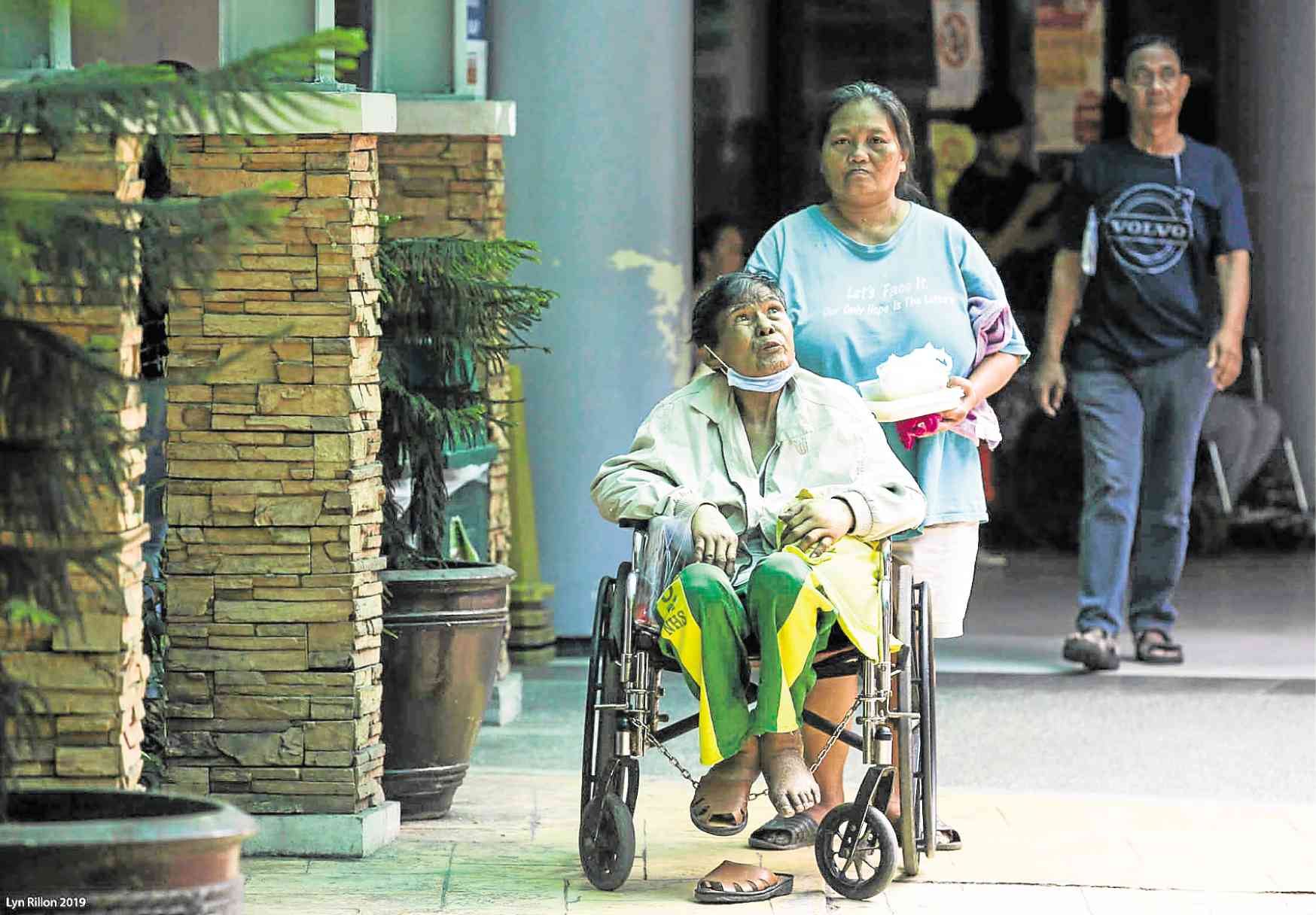 FRESH AIR Judith Daramay wheels her husband, Antonio Cabillan, out of the National Kidney and Transplant Institute in Quezon City for fresh air in between his peritoneal dialysis treatment, which is covered by his benefits from the Philippine Health Insurance Corp. —LYN RILLON

MANILA, Philippines — Antonio Cabillan, 72, has learned to treat the National Kidney and Transplant Institute (NKTI) in Quezon City as his second home.

He and his wife, Judith Daramay, 53, would set up camp at the government-owned specialty center from morning to late evening while waiting for his peritoneal dialysis sessions.

Cabillan was diagnosed in February 2016 with end-stage renal disease (ESRD), a chronic kidney illness that has taken a toll not only on his physical state but also on his family’s financial condition.

“We were so poor then that we couldn’t afford to pay for his treatments, so I had no choice but to sell our house in Malabon,” said Daramay. “It seems the NKTI has become our new house.”

Cabillan has been confined to a wheelchair  for three years since his diagnosis. Daramay stays by his side as he undergoes thrice weekly treatments requiring a special cleansing fluid that costs P1,400 a day, she said.

Daramay used to line up at the Philippine Charity Sweepstakes Office overnight to secure free dialysis treatments for her husband—until the agency stopped providing these.

Daramay is thankful for the free dialysis. But the coverage is simply not enough, especially since her husband is also suffering from heart and lung complications that require maintenance medicines and occasional hospital confinement, she said.

“Sometimes when his hemoglobin level drops drastically, blood transfusion is needed,” she said. “But we can’t afford it. I thought I could just bring people I know from Malabon to donate blood, but they’re always rejected—because of tattoos, not being healthy enough, among other reasons.”

Homeless and practically penniless, Daramay said she had wanted to return to her native Bohol province and move her husband’s treatment to Vicente Sotto Memorial Medical Center in Cebu province. “But we were told that it is difficult to process his transfer documents,” she said.

In 2015, PhilHealth issued Circular No. 022 expanding dialysis coverage from 45 to 90 free sessions a year. Each beneficiary receives a case rate amount of P2,500 a session.

But as the agency itself noted, a patient with kidney disease usually needs dialysis thrice a week, for a total of 144 sessions a year. This means the patient still has to pay for the 54 sessions in excess of the PhilHealth coverage.

This much is true for Renato Samia Sr., 63, who has been undergoing treatments at WellMed Dialysis & Laboratory Center Corp. since 2015.

With his PhilHealth coverage, Samia receives free dialysis sessions twice a week, or eight sessions a month for 10 months. His family has to pay around P2,500 for each session beyond that.

“Without the free dialysis sessions, we won’t be able to shell out around P20,000 a month or around P200,000 a year,” said Samia’s son, Renren. “Aside from paying for my father’s dialyzer and injections of erythropoietin, we still have to set aside money for his other medications.”

Erythropoietin injections are not covered by PhilHealth.

While the NKTI has bigger facilities, WellMed has been functioning as an alternative freestanding dialysis center since July 2015.

This small private center, for instance, only has 14 available hemodialysis machines, almost a third of what the NKTI has.

As a center accredited by PhilHealth, patients can receive treatments from WellMed under its membership benefit claims.

According to Renren, WellMed has been processing his father’s PhilHealth benefit eligibility form for free dialysis sessions.

But former employees of WellMed have accused its owners of filing benefit claims for “ghost dialysis”—or nonexistent sessions for its patients who had died or who had not used up the free 90 sessions covered by PhilHealth.

The Inquirer visited WellMed to reach out to one of its owners, ophthalmologist Bryan Christopher Sy, who had refused to comment on the matter.

WellMed operations manager Cheeney Rodriguez said she was not aware of the ex-employees’ allegations and was only concerned with the center’s day-to-day affairs.

She refused to answer the Inquirer’s questions about WellMed operations, such as the average number of treatments that patients usually received at the center.