‘Graduating’ senators reveal some of their best-kept secrets 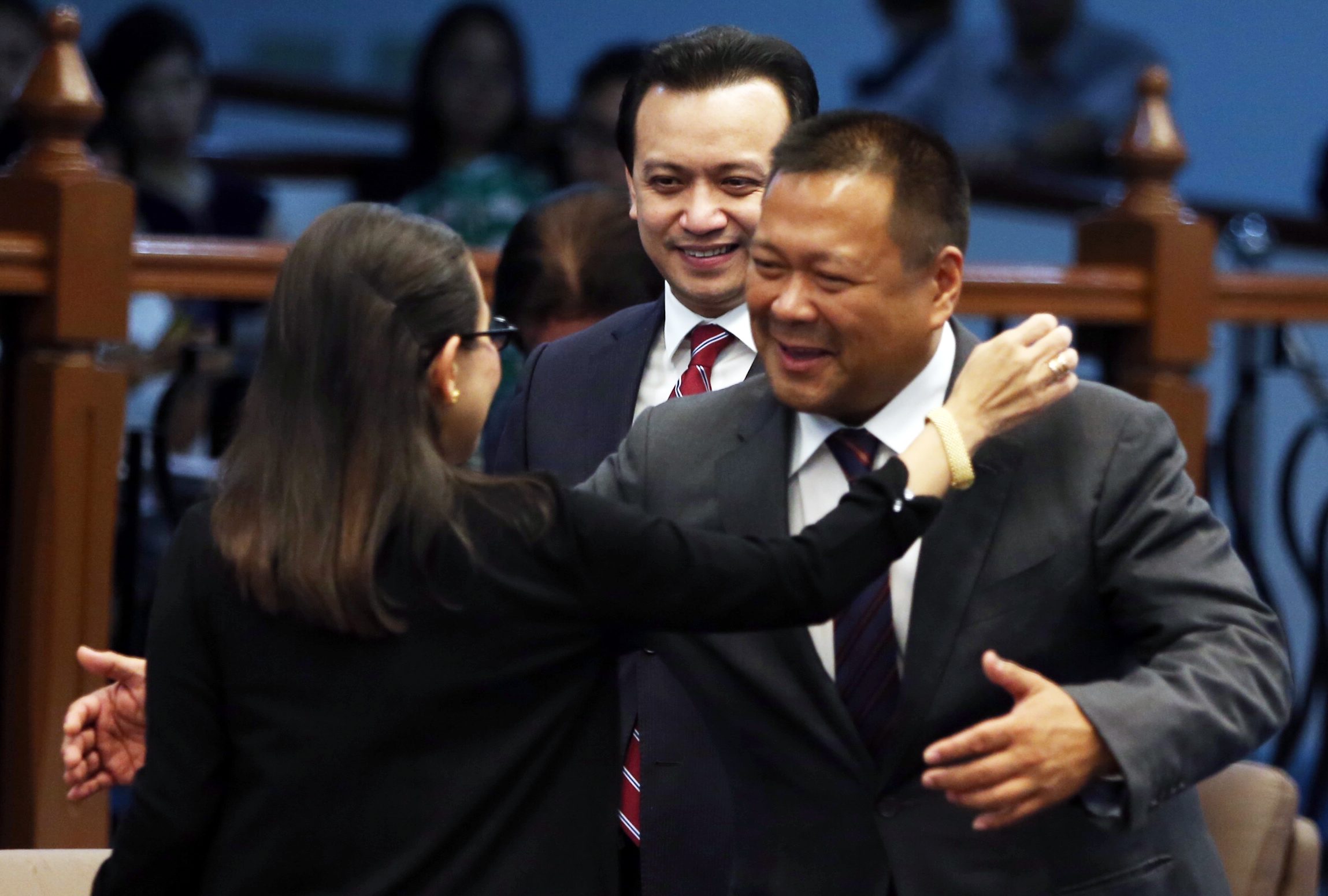 MANILA, Philippines — Peals of laughter echoed through the usually staid Senate plenary as the senators bade goodbye to six of their colleagues whose terms ended at the close of the 17th Congress on Tuesday night.

The “graduating” senators ribbed their soon-to-be former peers and spilled some of their best-kept secrets.

The senators also chose to set aside their animosities, crediting each other for the passage of legislation during the first half of the Duterte administration.

“They will be graduating with honors,” Poe said before the Senate passed separate resolutions commending each of the six for their work.

“As they take their leave, let it be said that the good of the laws they have written, the enlightenment their pronouncements have caused and the light their investigations shone on the dark moments of our history will stand both the test of time, and the judgment of history for the courage and the competence they were pursued,” she said.

“But what is more admirable than their industry is the independence they have shown in performing their duties,” she added. “Yes, they may have been affiliated with a party or allied with a President, past or present. But every time they showed up for work here they did not deposit their principles at the door.”

Delivering her farewell speech, Legarda disclosed that she once sheltered Honasan in her house in Makati City when the former military officer was being hunted for plotting a coup against President Corazon Aquino.

“Such a respectable man. [Honasan] actually carried my second son when he was just a few months old. He came to our apartment when he was still a fugitive,” she said as the animated senators guffawed at her confession.

“A humble and an upright man. [He is] a man of few words, but a very wise and dear friend,” she added.

The 71-year-old Honasan, who also figured in failed coup attempts against President Gloria Macapagal-Arroyo, expressed his gratitude to his colleagues as he closed his 21-year tenure in the Senate.

“I know you will miss me because of my deafening silence,” he said, drawing giggles from his colleagues.

Honasan took pride in serving in the Senate along with Senators Juan Flavier and Miriam Defensor-Santiago and current Senate Minority Leader Franklin Drilon.

Realizing that Flavier and Santiago were now deceased, he jested: “They are all ‘late.’ I hope this does not give us an indication of what is to come.”

While they have ended their careers as senators, both Honasan and Legarda will still be in the government.

Legarda had just won the seat of the lone district of Antique in the House of Representatives, while Honasan had been picked by President Rodrigo Duterte to head the Department of Information and Communications Technology.

Ejercito, who lost his reelection bid in the May 13 elections, thanked Sen. Cynthia Villar, who remains the richest member of the Senate, and other members of the so-called Seatmates bloc—Senators Juan Miguel Zubiri, Sherwin Gatchalian, Joel Villanueva and Sonny Angara.

He said he appreciated their help in his campaign by dancing in his television commercial “even if (Gatchalian) did not know how to dance.”

Turning to Villar, he said: “Thank you for your care, my Mama Bear, during the campaign … Thank you for treating me like your own son. If you decide to adopt me, it’s OK with me if you leave me with inheritance.”

Perhaps the most stirring gesture came from reelected Sen. Nancy Binay, who offered Trillanes a teaching position at the University of Makati and free medical services at Ospital ng Makati.

Trillanes, who failed to deliver his valedictory speech as he had to attend a meeting, had led the Senate inquiries into the supposed ill-gotten wealth of Binay’s father, former Vice President Jejomar Binay.

Trillanes confirmed that Binay made the offer.

“I appreciated the sincere offer, but I respectfully declined out of delicadeza. It was truly nice of her,” he said.

In a post on Twitter, Sen. Panfilo Lacson also confirmed Binay’s offer, but added as a joke that Binay also offered Trillanes free space at Makati Parking Building II and free burial at the city cemetery.

Lacson noted that Trillanes “pursued to the hilt” the Senate inquiry into alleged irregularities involving the city university and the parking building.

In his 15 years as senator, Lacson said the 17th Congress was “above par in camaraderie, both [in the] majority and minority blocs.”

“I attribute this atmosphere mostly to the leadership style of (Senate President Vicente Sotto III). And I’m not trying to be generous with him when I say this,” Lacson said in a text message. —With a report from Maila Ager

Read Next
‘Even with PhilHealth coverage, free dialysis not enough’
EDITORS' PICK
Someone from the Philippines can become $356 Million richer this Tuesday
Cherry Mobile teams up with Cloud Panda PH, launches online store
Trump took shelter in White House bunker as protests raged
Calida attends House hearing on ABS-CBN franchise
Leveling up your ‘lutong bahay’ with the kitchen companion you never knew you needed
WATCH: Edsa traffic blues on GCQ Day 1
MOST READ
‘If I had not been SolGen, I will make you eat your words,’ Calida tells Coco Martin
5 car dealership outlets shutting down
Calida says he is not ‘at loggerheads’ with Congress on ABS-CBN issue
WATCH: Edsa traffic blues on GCQ Day 1
Don't miss out on the latest news and information.