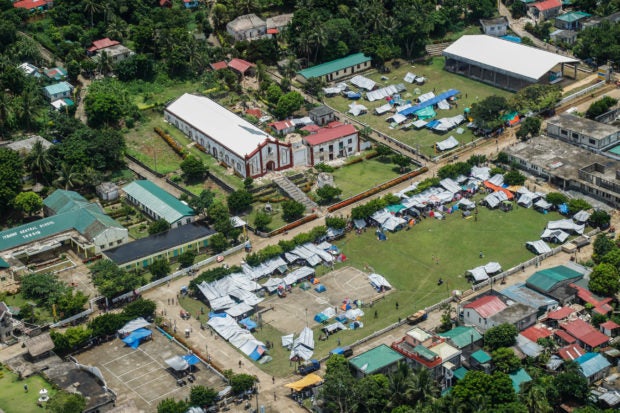 Aerial photo shows the extent of the damage caused by the earthquake that hit Batanes recently. President Rodrigo Roa Duterte conducted an aerial survey of the affected areas and a situation briefing with members of his cabinet and local government officials at the Basco Airport on July 28, 2019 to discuss disaster response measures in the aftermath of the earthquake. PRESIDENTIAL PHOTO

According to NDRRMC’s report, a total of 230 aftershocks have been recorded since the earthquake that hit the province, particularly the town of Itbayat, on Saturday morning.

The aftershocks, NDRRMC added, ranged from magnitude 2.2 to a moderately strong magnitude 5.9.

The initial quake of Magnitude 5.4 hit the town of Itbayat on Saturday at 4:16 a.m. It was followed by a stronger 5.9 quake merely hours later.

NDRRMC said the quake affected 911 families comprised of 2,963 individuals, some of whom are staying at the town’s plaza in makeshift tents.

Meanwhile, the Armed Forces of the Philippines (AFP) has sent two search and rescue teams as well as one medical team to help the affected residents.

The Department of Energy, meanwhile, is tasked to ensure the availability of generator sets and coordination with the National Power Corporation (NPC) and the National Electrification Administration (NEA) for the resumption of power in the town.

President Rodrigo Duterte conducted an aerial inspection of the town on Sunday and ordered authorities to ensure that supply lines in quake-hit Batanes are working to make sure nobody gets hungry.

Further, Duterte said he will give the government of Batanes P40 million for the construction of a hospital in Itbayat. /je