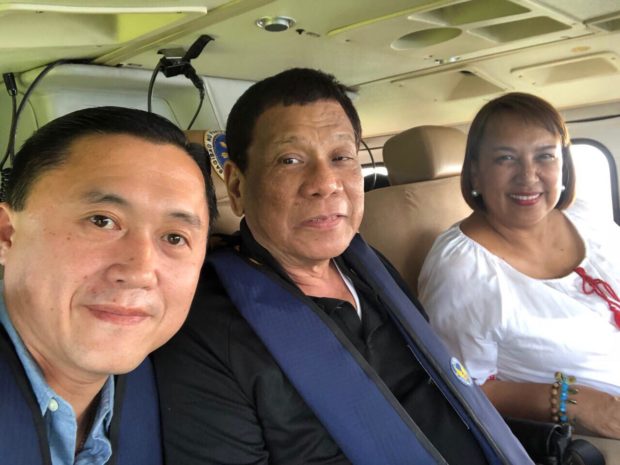 President Rodrigo Duterte goes on an aerial inspection of earthquake-affected sites in Itbayat, Batanes on Sunday, July 28, 2019. With him are Sen. Christopher Go and Batanes Gov. Marilou Cayco. (Photo from the Office of Sen. Christopher Go)

MANILA, Philippines — President Rodrigo Duterte on Sunday said he would give Batanes P40 million following the twin quakes that the province on Saturday morning.

The President, who was in Batanes to check on the status of the town of Itbayat, the town hardest hit by the quake, was briefed on the situation and status of assistance provided to the affected residents.

The provincial government said the hospital in the town could be used because it was damaged by the quake.

The President, who went on an aerial inspection of quake-affected sites, said the provincial government was not keen on just repairing the hospital as it would be too “expensive” without the assurance of durability.

“I’ll give you the P40 million. I hope you put it to good use and bring you something like — small clinic hospital. There are not very many of you here. You would need transportation — that is, for emergency [use],” he said, speaking partly in Filipino.

As of this writing, eight people have been reported dead and at least 60 others were injured, with one still missing.