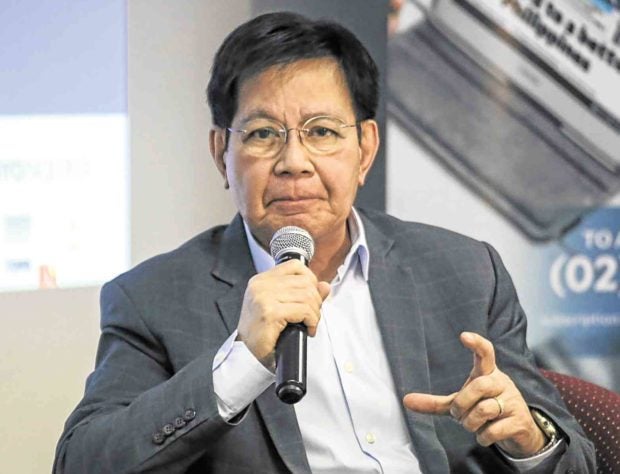 MANILA, Philippines — President Rodrigo Duterte should have excluded lotto from his decision to pull the plug on games operated by the Philippine Charity Sweepstakes Office (PCSO) because there was no allegation that lotto operators were shortchanging the government, Sen. Panfilo Lacson said on Sunday as the government defended the shock order that saw the police shutter 21,000 lottery stations across the country.

The Preside3nt claimed that all the games were rigged and the contracts drawn up “to favor corruption.”

He said he would not honor any court order issued to frustrate a government investigation.

The President did not mention names, but Malacañang said he would soon identify the wrongdoers.

Presidential spokesperson Salvador Panelo said on Sunday that the government was losing 60 to 70 percent of revenue from the games because of corruption.

Justice Secretary Menardo Guevarra on Sunday said the President had the authority to suspend and even terminate the PCSO’s gaming operations if he had reason to believe that the operators cheated the government.

Stressing that a gaming license “may be revoked at any time,” Guevarra said the President may suspend lotto and STL operations based on “preliminary information” of alleged irregularities, even before any official investigation.

“It should be emphasized that a gaming license is not a contractual right but a mere privilege that may be revoked at any time by the state,” Guevarra told reporters.

Lotto and STL operations, while legal, may not resume while the investigation is going on or “until the people responsible for cheating the government have been unmasked,” he said.

Guevarra said the National Bureau of Investigation would investigate the alleged nonremittance of the government’s proper share by operators and allegations of corruption involving PCSO officials and employees.

Asked why due process was not observed before the games were suspended, he replied that an investigation would give the PCSO and the operators the opportunity to “show that there’s no … corruption or fraud involved in their operations.”

He said the PCSO would continue to operate, “albeit with limited resources.”

Lacson told the Inquirer by phone that while the closure order was a “welcome development,” the President should have confined it to STL and allowed lotto drawings to continue.

“It’s like this: If the intention is to stop gambling altogether, then all forms of gambling, including the Pagcor-regulated games like casinos and online [gambling] should been included,” he said, referring to the casino regulator Philippine Amusement and Gaming Corp.

“Since it doesn’t appear that way, then lotto outlets should have been spared since there are no reports of revenue cheating as far as lotto operations are concerned,” he said.

Lotto drawings, he pointed out, are “computerized … and therefore closely monitored — unlike STL where [the] PCSO, for millions of reasons, has consistently resisted to make it more transparent and foolproof.”

The President’s move, however, is a litmus test for the sincerity of the police in the campaign to stamp out the illegal numbers game “jueteng,” reiterating how gambling lords had used STL as a front for the racket.

“The die is cast, so to speak. If there’s bet collection, it means there’s jueteng,” Lacson said.

The bigger challenge, however, lies in the determination of Philippine National Police officials to turn down protection money from jueteng operators, which could reach as much as P4 million a month for regional police directors, Lacson said.

Lacson, who initiated a crackdown on jueteng when he served as PNP chief in 1998, maintained that the underground lottery persisted despite several congressional inquiries due to the willingness of crooked politicians and police officials to accept payola.

He estimated that STL operators in Metro Manila, Cordillera, Ilocos, Calabarzon, Central Luzon and the Bicol regions were collecting at least P200 million a day, or P72 billion a year.

But STL operators reported only an average of P4 billion in annual collections to the PCSO even after the government extended STL operations in the Visayas and Mindanao, leaving billions of pesos in the pockets of jueteng operators and corrupt public officials, Lacson added.

“A big chunk of that P4 billion was not even cash remittances, but collectibles that are not collected anyway … We do not need an Albert Einstein to figure out how much goes to the individual pockets of STL franchise holders, corrupt politicians, policemen and PCSO officials,” he said.

“No matter how many congressional hearings are conducted, the palms of these people continue to be greased by gambling money,” he added.

For Sen. Sherwin Gatchalian, allowing private companies to take over the functions of the PCSO may just do the trick and ensure that the profits from state-sanctioned games would reach the intended beneficiaries.

“The proceeds should be remitted directly to the Department of Social [Welfare] and Development to fund social service programs. This way we can avoid the mishandling of funds that are supposed to be allocated to help the poor,” Gatchalian said in a statement.

House Speaker Alan Peter Cayetano urged the public to give the President the benefit of the doubt.

“As I always say, we cannot easily judge the President because he receives more information and he has more sources, formal and informal, whether intelligence or processed and actionable intelligence,” Cayetano said.

“The closure ordered by the President will prevent the further hemorrhaging of the financial resources of the PCSO, put a stop to the reports of widespread corruption, and commence the needed reform and rehabilitation of the agency,” Año said in a statement.

Año urged all local governments to obey the President’s order, warning that any local official who would prevent or interfere in the closure of any PCSO gaming outlet would be “dealt with accordingly to the fullest extent of the law.” —With reports from Dona Z. Pazzibugan, Jeannette I. Andrade, and DJ Yap

Read Next
Patients seeking medical aid from PCSO may turn to Palace
EDITORS' PICK
New strategies urged to improve public transport
Chaos as thousands return to work in Metro Manila
Cherry Mobile teams up with Cloud Panda PH, launches online store
Leveling up your ‘lutong bahay’ with the kitchen companion you never knew you needed
Senate OKs on 3rd reading bill allowing school opening after August
Someone from the Philippines can become $356 Million richer this Tuesday
MOST READ
‘If I had not been SolGen, I will make you eat your words,’ Calida tells Coco Martin
51 percent of German firms holding back investments in PH, but not because of COVID-19
Chaos as thousands return to work in Metro Manila
Restaurant dine-in operations approved in MGCQ areas
Don't miss out on the latest news and information.