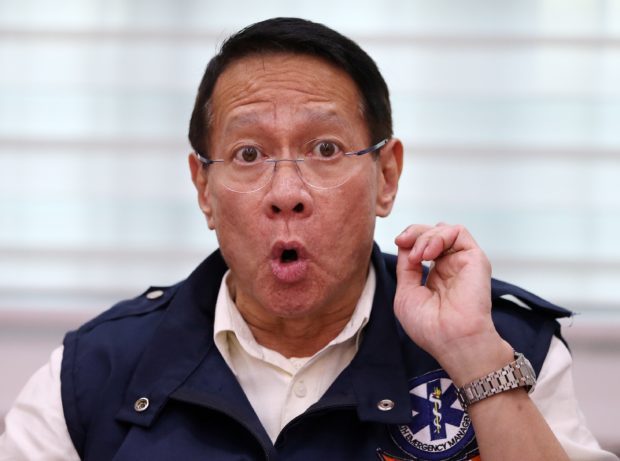 MANILA, Philippines — A pharmaceutical company owned by the family of Health Secretary Francisco Duque III earned millions of pesos from several government contracts from the Department of Health (DOH) for the supply of medicines in public hospitals, official documents obtained by the Inquirer and shared by Sen. Panfilo Lacson showed.

Lacson said two of the supply contracts bagged by Doctors Pharmaceuticals Inc. (DPI) lasted until October 2017, when Duque was appointed health chief for the second time.

Duque’s appointment was an apparent breach of the law prohibiting conflict of interest among public officials.

Reached by the Inquirer on Sunday night, the health secretary said he had nothing to do with DPI’s contract from April to October 2017 because he assumed office on Nov 6, 2017.

Lacson is set to deliver a privilege speech on various irregularities hounding Philippine Health Insurance Corp. (PhilHealth), where Duque sits as ex-officio chair, when the Senate resumes its plenary session on Monday.

The senator earlier said he was challenged to dig deeper into the corruption scandal in the state-owned health insurance firm after Duque claimed that his decadeslong career in government was unblemished.

Lacson said he also took Mr. Duterte’s rants against wrongdoing by public officials, which the President again mentioned in his fourth State of the Nation address on July 22, as a signal for him to continue unmasking irregularities in the government.

“The President said ‘you are free to investigate and free to expose (graft and corruption).’ So I said to myself, ‘I have been doing that for a long time,’” he told the Inquirer.

“Now I’ll just wait if (the President) will act accordingly or not,” he said.

The senator said he likewise discovered that PhilHealth had overpaid certain private hospitals as mentioned in the Inquirer series of investigative reports last month.

In one particular case, Lacson said PhilHealth released P5 million to pay for medical services to members rendered by a private hospital that had asked for only P200,000.

“That’s an incremental increase of 2,500 percent. Where did the overpayment go?” he said.

The general information sheet that DPI submitted to the Securities and Exchange Commission (SEC) in 2018 listed Duque’s brother, Cesar T. Duque, as chair, while their sister, Dr. Luz Duque-Hammershaimb, was president.

Other members of the company’s board were Joyce Ma. Duque, Leon S. Guerrero and Ma. Theresa SP. Castro.

SEC records also showed that Duque served as one of its directors in 1996.

Cesar and Luz were among those listed as board members and officials of Educational and Medical Development Corp., which leased its building in Dagupan City to PhilHealth last year.

The allegedly irregular contract was cited by parents of 10 students who allegedly died after they were inoculated with the Dengvaxia vaccine, in bringing graft and plunder complaints against Duque in the Office of the Ombudsman last month.

Duque was first designated by President Gloria Macapagal-Arroyo to head the DOH in October 2004, just three years after she named him president and CEO of PhilHealth.

The widespread misuse of PhilHealth funds came to the fore after the Inquirer’s investigative reports exposed “ghost” dialysis treatments and overpayments to private medical institutions.

Records culled by the Inquirer from Philippine International Trading Corp. (PITC) showed that DPI sold more than 920,000 capsules (500 milligram) of amoxicillin, an antibiotic, for P23.5 million to the DOH in October 2014.

A purchase order issued by PITC Pharma Inc. said the medicines were intended for the “DOH complete treatment pack.”

Garin, who was then acting director general of the Food and Drug Administration, said an inspection of the pharmaceutical company’s production plant showed that there was “no assurance that the manufactured drug products are of good quality.”

“The affected drug products present safety risks and potential adverse health consequences. Therefore, (DPI) has been ordered to discontinue their manufacturing operations,” she said in her order on June 23, 2015.

She directed all medicine distributors, retailers, hospitals, pharmacies and clinics to stop selling drugs produced by DPI, and asked the public not to buy them.

Despite this, the company was still awarded a contract by the DOH for the supply of P3.7 million worth of amoxicillin on April 12, 2017. The fund was taken from the regular budget of the health department.

Duque said he had nothing to do with Garin’s recall order in June 2015, as he was not in the government at the time.

He said he divested himself of his interest in DPI in 2006.

“Wala akong makita na dapat ikaso sa akin (I can’t think of any case that can be brought against me). I already divested [from DPI] and I was not with [the] DOH then),” Duque said when asked for comment.

He did not speculate on Lacson’s motive for digging into his family’s company, saying he will give “factual answers” to any issues raised by the senator.

On the alleged bloated payments made by PhilHealth, Duque said the issue should be raised with the executive officers since he was not involved in operations as chair of the board.

Lacson said he stumbled upon three other supply agreements that the pharmaceutical company won from the DOH in the previous years, which he would present in his privilege speech. —WITH A REPORT FROM DONA Z. PAZZIBUGAN