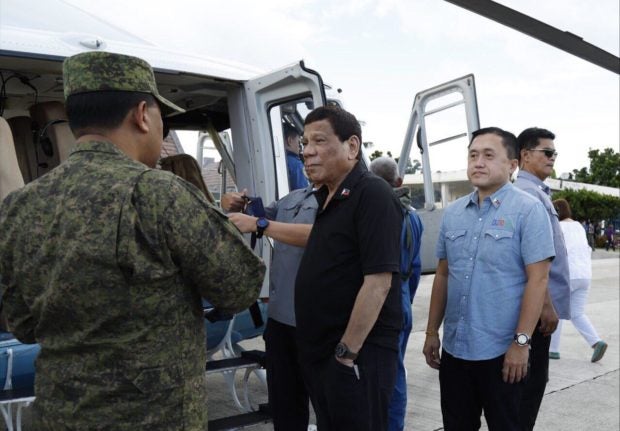 MANILA, Philippines — President Rodrigo Duterte on Sunday expressed interest in extending the airport runways in Batanes, saying that the move could be a “very crucial factor in the days to come.”

During a briefing in Batanes following the twin quakes that hit the province, the President said extending the airport runways in the province would be beneficial to national security.

“I’m interested in the project of extending both the runways for our national security reasons. It could be a very crucial factor in the days to come,” he said. “It will be good if we are prepared so that… We have to defend those islands there, you have to have a launching deck somewhere here.”

The President made the remark after he directed the Coast Guard to patrol the Batanes Islands to ensure they would “remain ours.”

“I’ve been flying here in the area of the epicenter,” he said. “There are two islands — big ones. I told the mayor [Raul de Sagon]: It is ours? I don’t see any — put something, sort of a symbolic… Stealing land has become common. The Chinese started it,” the President, speaking partly in Filipino, said.

“You might want to ask the Coast Guard to just go on standby. Take turns patrolling the islands from time to time — not every day, but just to assure that those islands will remain ours. We’re in a difficult situation now. If we steal back from China, it might retaliate with a missile. We can’t take that.”

The President was in Batanes to check on the assistance provided by the local and national government as well as the status of the families affected the quakes that hit the province on Saturday.

As of this writing, eight people have been reported dead and at least 60 others were injured, with one still missing.