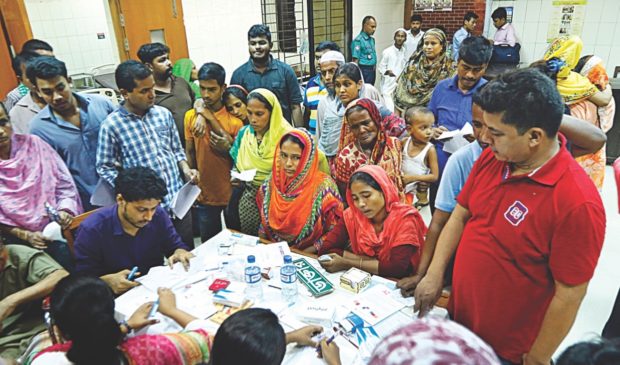 Doctors grapple with high number of people who thronged the emergency section of Shaheed Suhrawardi Hospital in the capital last night with fever. Many of the patients claimed that they were suffering from dengue. Photo: Palash Khan via The Daily Star/Asia News Network

DHAKA — Last Sunday, when Shahjadi Akter’s five-year-old daughter began running a fever, she rushed the child to Dhaka Medical College Hospital from her Hosni Dalan house. Doctors there diagnosed her with dengue, but could not admit her due to a lack of beds.

They told Shahjadi that since the infection was at an initial stage, it could be treated at home.

That, however, was not the case as the situation took a turn for the worse.

Five-year-old Alia’s condition deteriorated and she was rushed back to DMCH around 2:00am on Friday. Again, there were no beds available.

Left with little choice, Shahjadi spent the next five hours going to three different hospitals — Mitford Hospital, Icddrb, and Dhaka Shishu Hospital — with her daughter in tow. Unfortunately, she got the same response.

As a last-ditch effort, she took Alia to the Shaheed Suhrawardy Medical College Hospital (ShSMC) around 7:00am. Doctors there were initially reluctant to take her in, but seeing Alia’s blood pressure dropping fast, they finally admitted her.

“I could manage a place on the walkway of the hospital. Alia is doing better now,” Shahjadi told The Daily Star yesterday.

Alia’s predicament sums up the grim picture of how medical centers in the capital (Dhaka) are struggling to accommodate a growing number of dengue patients.

This year, hospitals have seen a record number of dengue patients, unmatched in the past 18 years.

A total of 10,528 people have been infected with the mosquito-borne disease till July 27. Last year, the total number was 10,148, according to the Directorate General of Health Services (DGHS).

Meanwhile, authorities of different hospitals in the capital said at least 30 dengue patients have died so far. But the DGHS maintains that only eight have died of the disease.

Explaining the disparity in the number of deaths, Prof Dr Meerjady Sa-brina Flora, director of Institute of Epidemiology, Disease Control and Research (IEDCR) and also the head of death review committee of the government, said after a patient dies, they collect information, as well as blood samples, of the deceased to confirm the cause of the death. Only after getting all those, they can declare whether it was dengue-related or not.

Director of Shishu Hospital Prof Syed Shafi Ahmed said 87 children were taking treatment in the hospital, and they were given free dengue tests and treatment to 25 to 40 patients every day at the outdoor.

Around 400 patients have so far taken dengue treatment at the 664-bed hospital since March.

“Round the year we have a shortage of seats due to the large number of patients, but even then we have kept 87 seats in the hospital for dengue patients,” he said.

Shafi said they did not allow patients to stay on the floor as it was difficult to manage.

HM Nazmul Ahsan, associate professor at ShSMC, said that considering the present dengue situation, they do not refuse any dengue patients despite having a capacity to handle only 60 patients.

Many patients are taking treatment at the hospital’s veranda and walkways, he said.

In DMCH, of the 800 beds in its medicine wards, 561 were occupied by dengue patients yesterday morning. The number was around 200 last week. At least 233 dengue patients were admitted to the hospital yesterday.

In Narayanganj, a man died of dengue on July 11 in the city’s Isdair.

His father Kaykobad Siddiqui said his son Sawon Kabir Salehin, 38, was diagnosed with dengue on July 11 and died in Islamia Heart Centre in Narayanganj.

Elsewhere, a first year student of Jahangirnagar University died of dengue yesterday, while she was on her way to Chattogram Medical College from Cox’s Bazar.

The victim U Khein Nu, a first year student of Pharmacy department, hailed from Cox’s Bazar.

According to the DGHS, 373 people have been infected with dengue outside the capital since January.

Of them, 72 are in Dhaka division, 142 in Chattogram division, 71 in Khulna division, 40 in Rajshahi division, 35 in Barishal division and 13 in Sylhet division.

Most of the hospitals outside Dhaka, however, are struggling to diagnose dengue patients due to a lack of NS1 kits, which are used to do the diagnosis at the initial stage.

Saiful Ferdous, deputy director of Rajshahi Medical College Hospital, said they did not have the kits, but they were using the old method to diagnose patients.

Akhterul Islam, deputy director of Chattogram Medical College Hospital, said other than the blood separation machine, the hospital did not have any facility for dengue diagnosis.

“We can provide treatment to patients already diagnosed with dengue, but cannot diagnose a new patient. The tests have to be done elsewhere,” he said.

Bandarban civil surgeon Aung Shwe Prue Marma said no dengue pa-tient was detected in the district so far. Besides, the district had no laboratory for diagnosing the virus, he added.

Talking about the doctors dealing with dengue patients outside the capital, DGHS officials said the physicians did not have the NS1 kit to diagnose dengue instantly.

IEDCR’s Flora said they were yet to provide dengue diagnosing kits as the number of cases outside Dhaka was still comparatively very low.

The NS1 antigen test (nonstructural protein 1), is a test for dengue, introduced in 2006, which allows for rapid detection of the disease on the first day of fever, as antibodies appear some five or more days later.

The mobile court visited 78 under construction buildings and found Aedes mosquito larva in eight of them.

Executive Magistrate of DSCC Mizanur Rahman said they fined them under section 269 of the penal code-1860, which has a provision for awarding six months’ imprisonment and fine or both for anyone who “unlawfully or negligently does any act which is likely to spread the infection of any disease dangerous to life.”

The government yesterday issued a statement to raise awareness of the steps needed to stop the spread of dengue and the measures to protect themselves from being infected by the mosquito-borne disease.

Dengue peaks in the monsoon (April-October) season. Be alert during this period, a press release issued by the Press Information Department (PID) said.

It further said, “The carrier of the dengue fever, Aedes mosquito, breeds in clear water”, adding that one must not let water accumulate around their office, house or in neighboring areas. It suggested changing accumulated water in containers every three days.

“Aedes mosquito usually bites during the day. Cover your body, as much as possible, with your clothing to protect yourself from possible mosquito bites,” the release added.

“Use mosquito nets even while sleeping in the day time,” it advised.

Dengue-affected persons have been advised to identify it by not only the symptoms of fever, headache, muscular pain or red skin rash, as lately it has been observed that there are some exceptions, the release noted.

It advised dengue patients from taking any other medicine except paracetamol. The patient should be given plenty of fluids, it said, requesting a dengue test at the first sign of a fever.

It cautioned patients that even after remission of fever, one can have severe complications due to dengue.

The information ministry introduced a media cell to provide necessary information to make people aware of the necessary guidelines about dengue treatment through both print and electronic media.

It would also give out information regarding flood, relief and shelter and spread awareness over the recent child kidnapping rumors.