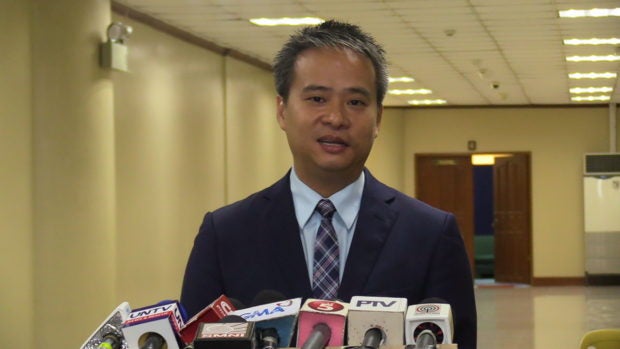 MANILA, Philippines —  Sen. Joel Villanueva on Friday lamented how the “powerful and the ruling class” won as President Rodrigo Duterte vetoed the Security of Tenure bill.

Villanueva, who sponsored the Security of Tenure bill, said “we knew right from the start that the odds were stacked against the measure.”

But he said “we pressed on, knowing that many workers are relying on us to finally end illegal forms of contractualization,” adding that “the heaviest burden was perhaps the unenviable task of meeting that expectation.”

Villanueva, chair of the he Senate committee on labor, employment and human resources, said “the bill languished in the legislative mill in the past 20 years” only to be vetoed by the President.

“Today, July 26, the struggle has ended with the veto of the President,” he said.

According to him, Congress has “labored on this bill striving for fairness at every turn, considering every implication as we weaved words into provisions to protect workers from illegal forms of contractualization, and to ensure that businesses will not be at a disadvantage.”

“We are expected to rise above politics to favor the powerless, and do what is just. Most of the time, those in the corridors of power win. Unfortunately, this is one of those times,” he said.

In a tweet Thursday night, Villanueva said profit won over the welfare of Filipino workers.

“What is more fair and just than to protect the welfare of workers who have been aggrieved for a long long time by Endo. #SecurityofTenure #EndEndo #VPositive,” he said.

Despite the President’s veto, Villanueva said he would continue to “persevere” to end contractualization in the Philippines, a  campaign promise of Duterte

“But make no mistake about it. We will persevere, until we see that no worker will involuntarily lose his or her job because of contractualization,” he said. /jpv

Read Next
Party-list solon briefly held at Naia for allegedly cracking bomb joke
EDITORS' PICK
What to watch out for when selecting a video surveillance solution
Heads may roll at BOC, says Palace if sugar smugglers are allowed to use recycled import permits
vivo brings to the Philippines a powerful smartphone with a slimmer body, the vivo Y02s for only PHP 6,499
DOH reports increase in daily COVID-19 deaths, mostly unvaxxed
Palace: Biggest supermarkets in PH commit to sell sugar at P70 per kilo
House energy committee chair Arroyo bats for cheap electricity
MOST READ
DepEd to give teachers P5K cash allowance within first week of classes
Alyssa Valdez to miss Creamline’s AVC Cup campaign
Brian Poe-Llamanzares receives his PhD in Public Administration
Ambulance driver dies of heart attack en route to pick up patient in Biliran town
Don't miss out on the latest news and information.