CARACAS, Venezuela – Venezuelan President Nicolás Maduro on Wednesday blamed the United States for a second widespread blackout this year that cast most of the South American nation in darkness amid an opposition campaign to overthrow him. 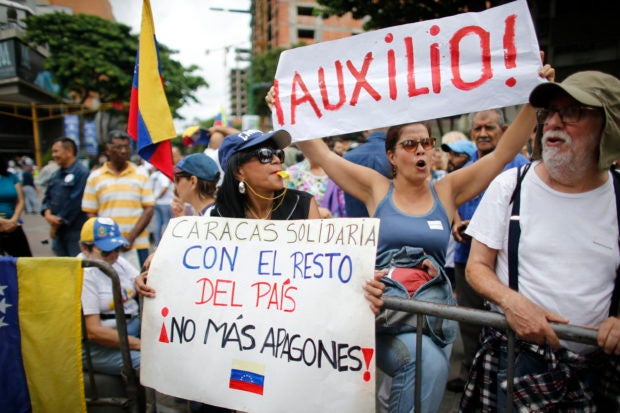 People protest a day after a massive blackout as they gather for a rally called by opposition leader and self-proclaimed interim president of Venezuela Juan Guaido, in Caracas, Venezuela, Tuesday, July 23, 2019. The lights were returning to life early Tuesday across Venezuela following a massive blackout a day earlier that crippled communications, froze the Caracas metro and snarled rush hour traffic, officials said. (AP Photo/Ariana Cubillos)

Cuban officials, meanwhile, underscored that their support for Maduro is unwavering, saying U.S. attempts have failed to divide the communist island from the ideologically aligned Venezuelan leader.

Maduro said the U.S. launched a “high-tech electromagnetic attack” to undermine his rule, but he gave no details or evidence linking the power failure to the United States.

“They have not been able, nor will they be able to with the unity, loyalty and cohesion of the Venezuelan armed force, which is making them desperate,” Maduro said.

He spoke on state TV surrounded by the high military command at the Fuerte Tiuna military base in Caracas overseeing the start to military exercises.

Venezuela is a once-wealthy oil nation that is caught in a historic political and economic crisis that has sent at least four million residents fleeing, driven by a lack of food and medicine.

Electrical power returned to Caracas and several states hours after the most recent failure. Maduro in March also blamed U.S. sabotage for a nationwide blackout lasting nearly a week, considered the nation’s worst power failure in its history.

Tensions between Venezuela and the United States intensified this year when it was first among dozens of nations to announce its support of Venezuelan opposition leader Juan Guaidó.

Guaidó in January declared Maduro’s last election a fraud and cited his role as leader of the National Assembly as giving him powers to oust Maduro and hold new elections. Guaido then in April led a failed military uprising.

Venezuelan officials also say the U.S. twice within the last week has sent a spy plane into its airspace. In one case, a Venezuelan fighter jet intercepted it, which U.S. officials say put the plane’s crew in danger and threating its mission conducted while flying in international airspace.

Cuba said the U.S. plan to overthrow Maduro is a failure and Cuba is unshaken in its support for the Venezuelan leader. The U.S. has been imposing new sanctions on Cuba with the stated purpose of forcing the Communist island to cut back its support for Maduro.

U.S. Secretary of State Mike Pompeo “is trying to disguise the failure of the U.S. plan to intervene in Venezuela with slander and unbelievable excuses,” Cuban Foreign Minister Bruno Rodriguez said Wednesday after meeting with Russian Foreign Minister Sergey Lavrov. “Cuba’s cooperation with the Bolivarian Republic of Venezuela is unshaken.” /gsg