DENVER – A Colorado school district trying to stop people obsessed with the shooting at Columbine High School won’t demolish the building as a way to deter intruders, officials said in a letter released Wednesday. 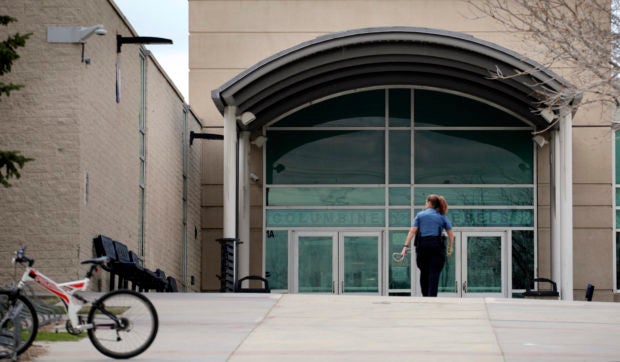 FIE – In this April 17, 2019, file photo, a police officer walks to the front doors of Columbine High School in Littleton, Colo., where two students killed 12 classmates and a teacher in 1999. The Jefferson County School District has abandoned a proposal to demolish Columbine and replace it after a community survey showed strong opposition to the idea. (AP Photo/Joe Mahoney, File)

Jefferson County Schools Superintendent Jason Glass wrote that a community survey on what to do about the high school in suburban Denver showed mixed reaction to knocking it down.

The district had floated Columbine’s demolition because of what Glass called its “inspiration” for people with a dark interest in the 1999 shooting that killed 12 students and a teacher.

Officials cited a constant presence of people trying to enter the building or being on the grounds without authorization, including a record number this year on the 20th anniversary of the shooting.

In April, a Florida teenager who authorities say was obsessed with the shooting and may have been planning an attack in Colorado just ahead of the 20th anniversary was found dead in an apparent suicide.

A search for the teen prompted officials to close public schools throughout the Denver area.

Glass said Wednesday that the district will create a better-defined perimeter around the school to deter intruders and increase student privacy, among other measures.

While Columbine “is now arguably one of the safest schools in the world, the ‘unauthorized individuals’ problem at the school must be addressed,” Glass said, adding, “it is our goal to create a classic and stately appearance for the school that the community will be proud of.”

Supporters and alumni of Columbine, named after Colorado’s state flower, argued that destroying the building would mean capitulating to the killers.

One notable exception was Frank DeAngelis, the school’s principal in 1999, who opposed demolishing after the shooting but changed his mind after years of coping with unwanted visitors. He retired in 2014.

“I think if we would have known or projected what was going to happen, we may have had a different discussion about going back into the building,” DeAngelis told The Associated Press in June.

The online survey assessed community support for a ballot measure earmarking $60 million to $70 million for a Columbine construction project. Roughly 57% of 6,962 respondents said they felt negatively about the proposal and 60% said they would likely vote against a bond measure.

Opposition to the idea was stronger from respondents in Littleton, where Columbine is located. Only 33% said they might support the rebuilding, while 64% looked negatively on the idea. Similar percentages there said they would vote for or against a bond. /gsg