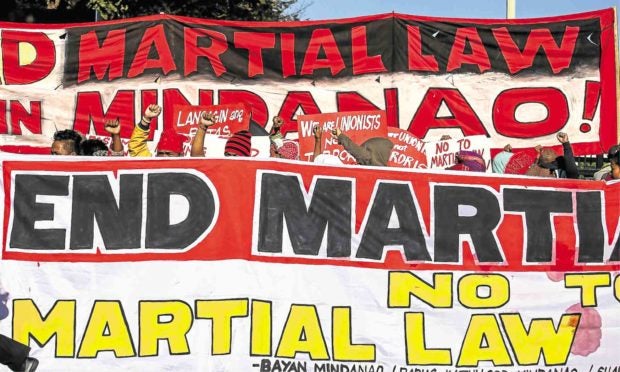 VIGILANT CITIZENS Protesters gather outside the House of Representatives in a futile attempt to sway legislators into rejecting President Duterte’s bid to extend martial law in Mindanao. —JAM STA. ROSA

MANILA, Philippines — Senate leaders are keeping an open mind on the new proposal to extend martial law in Mindanao for another year.

“I have to listen to the reasons why,” Senate President Vicente “Tito” Sotto III said in a text message on Tuesday.

Citing the sustained rebellion in the region, National Security Adviser Hermogenes Esperon Jr. said he would recommend the extension of martial law in Mindanao for another year.

While he is against martial law, Senate President Pro Tempore Ralph Recto said, “I also need to have an open mind and listen to our security experts.”

“They will have to explain their position convincingly. (It) will not be that easy,” Recto said in a separate text

Mindanao was first placed under martial after the Marawi City siege in 2017.

But President Rodrigo Duterte sought for an extension until December 31, 2017, and when it expired, he again sought to extend it until December 2018.

For the third time, Congress granted Duterte’s request to extend it for another year or until December 31 this year.